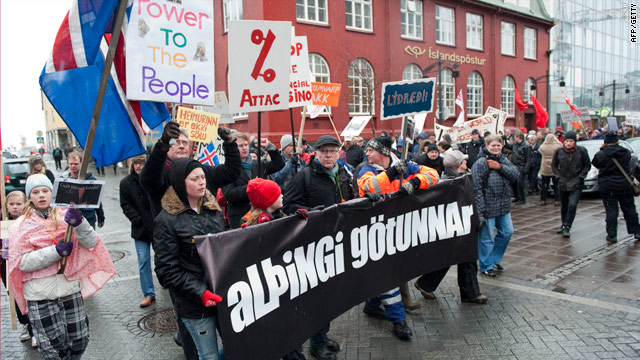 Protesters in Reykjavik March 6 demand that the government do more to improve economic conditions in Iceland.
STORY HIGHLIGHTS
RELATED TOPICS

(CNN) -- Iceland's voters overwhelmingly rejected a deal to pay billions of dollars it owes to the United Kingdom and the Netherlands, the Foreign Ministry said Sunday.

With around 90 percent of votes counted, just over 93 percent said no and just under 2 percent said yes. Not enough votes remain to be counted to change the result. Some 62.5 percent of Iceland's roughly 200,000 register voters cast ballots, the ministry said.

The referendum was on a law about repaying the Netherlands and UK, which helped savers in their own countries who lost money in a failed Icelandic Internet bank.

The British and Dutch governments came up with more than $5 billion for bailing out people who lost money in Icesave -- an online retail bank branch of Landsbanki. That Icelandic bank failed in October 2008, along with two other banks in the country.

Iceland's parliament passed a bill authorizing a state guarantee for repayment of the funds, but President Olafur Ragnar Grimsson declined to sign it in January. He cited public disapproval, and in particular, an Internet petition signed by up to one-quarter of the electorate, as a reason for not signing the bill. He said there needed to be a national consensus in addressing the issue.

"Of course we feel empathy for those people that lost money," he said Saturday while voting was going on. "We just want to get a more reasonable agreement," he told CNN.

It is not clear what happens now that voters have said no to the loan guarantees.

The Dutch government spent €1.3 billion ($1.87 billion) to cover bank losses in the country.

The Icelandic government said it has "clearly stated its intention to honor its international obligations and remains fully committed to implementing the bilateral loan agreements with the UK and the Netherlands."