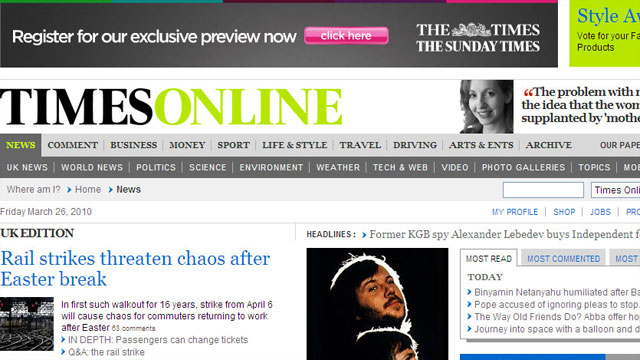 The publisher said both British newspapers will launch new Web sites in early May and offer a free trial period to registered customers.

The newspapers are currently available free on a combined site, www.timesonline.co.uk, but they will have separate sites starting in May. Subscribers will have access to both sites, News International said.

"At a defining moment for journalism, this is a crucial step towards making the business of news an economically exciting proposition," said Rebekah Brooks, chief executive at News International.

"We are proud of our journalism and unashamed to say that we believe it has value."

Would you pay to read your news on the web?

The only other major British newspaper currently charging for online content is the Financial Times, which charges a basic rate of £3.29 ($4.90) a week for a year-long subscription. Users can view up to 10 online articles for free each month, but they must register.

In its Alphaville blog, the Financial Times said "this experiment will be closely watched by the embattled media industry." The paper's digital media correspondent Tim Bradshaw wrote there are already doubts about the success of the paid-for plan.

"The wide availability of free news online has led many to question whether paywalls can attract substantial numbers of customers," Bradshaw wrote. "In the UK, newspapers face online competition from the BBC, which earlier this month pledged to curtail the scope of its Web sites."

Brooks, of News International, said the company expects to attract a growing base of customers with the online subscriptions.

"We are proud of our journalism and unashamed to say that we believe it has value.
--Rebekah Brooks, News International CEO
RELATED TOPICS

She also indicated the plan could be extended to cover the company's other two British titles, tabloids The Sun and News of the World.

"This is just the start," Brooks said.

Sunday Times Editor John Witherow said the planned subscription price will be a bargain, costing about the same as a cup of coffee.

Comments on the story in the Media section of The Guardian's Web site -- which is free -- were mixed.

"Bye bye to the Times then," wrote a user named rocketracer. "This goes against the basic principle of the internet which is about increasing access to information not restricting it."

Another user called jodro wrote, "Much as it pains me to say it, like everyone I like things for free, but some kind of Internet payment structure is the only way to rescue quality journalism and an independent press that can counterbalance the increasing powers that technological developments hand to governments worldwide."

"We are now in the midst of an epochal debate over the value of content and it is clear to many newspapers that the current model is malfunctioning," he said.

Murdoch said the experience of the News Corp.-owned Wall Street Journal had proved that charging for content could be made to work. He said 360,000 people had downloaded an iPhone WSJ application in three weeks. Users would soon be made to pay "handsomely" for accessing WSJ content, he added.

The media tycoon has also repeatedly threatened to pull his company's news Web sites from Google and put all company sites that are currently free behind a pay wall.