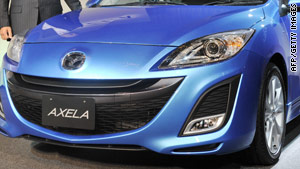 The Axela, also branded as the Mazda 3, was recalled on Thursday.
STORY HIGHLIGHTS
RELATED TOPICS

(CNN) -- Mazda recalled nearly 90,000 vehicles in Japan and China because of a problem with the transmission, a company spokesman said Thursday.

The recall was for about 35,000 of a passenger car called the Axela in Japan, the spokesman said.

The company also recalled in China about 55,000 of the same model that is called the Mazda 3 there.

Many car companies have recalled vehicles this year. However, none have come close to Toyota, which recalled more than 8 million cars because of multiple problems.