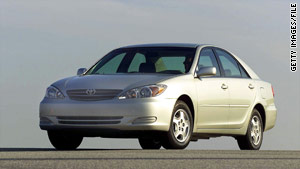 Toyota cars and trucks have been the subject of at least three separate major recalls in the past year.
STORY HIGHLIGHTS
RELATED TOPICS

Washington (CNN) -- The Toyota Motor Corp. has indicated to the U.S. government it will pay a $16.4 million fine -- the largest ever against an automaker -- for failing to notify the Department of Transportation of a "sticky pedal" defect in its cars for at least four months, according to a senior Transportation Department official.

The company has told the government it will sign legal documents Monday agreeing to pay the maximum civil penalty of $16.375 million, according to the official, who was not authorized to speak for attribution because the agreement has not been announced.

Toyota would then have 30 days to pay the fine.

This official added that an agreement does not release Toyota from any potential criminal liability or civil liability related to the sticky-pedal defect.

The Transportation Department's National Highway Traffic Safety Administration sought the fine after it learned, through documents obtained from Toyota, that the automaker knew of sticky gas pedal problems since at least September last year, the agency said this month.

Under federal regulations, automakers are required to inform the agency within five days of determining that a safety defect exists in one of its products.

"By paying the full civil penalty, Toyota is accepting responsibility for hiding this safety defect from NHTSA in violation of the law" the senior DOT official said Sunday.

Toyota cars and trucks have been the subject of at least three separate major recalls in the past year. One was for the "sticky pedal" situation in which gas pedals, as they age, begin to stick in a partially depressed position. Another was for gas pedals that can stick on some floor mats, and a third was for braking problems on Toyota Prius hybrid cars.

The largest fine levied to date by the government on an automaker was nearly $1 million taken from General Motors in 2004 for failing to deal promptly with a windshield-wiper issue, an amount that was negotiated down from the $3 million originally sought by NHTSA.