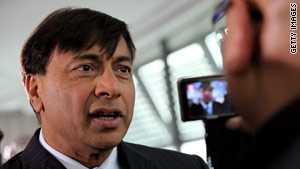 London, England (CNN) -- Britain's super-rich roared back in the past year, with the number of billionaires rising from 43 to 53 and the total wealth of the top 1,000 increasing by a third, according to the Sunday Times annual Rich List.

The increase in wealth is "easily the biggest annual rise in the 22 years of the Rich List," Times journalist Philip Beresford wrote, even as the country struggled to claw its way out of recession.

Mittal ranked fifth on last month's Forbes list of world's richest people. The magazine estimated his wealth at $28.7 billion then.

Russian-born tycoon Roman Abramovich, the owner of Chelsea soccer team, is second on the Times list, worth an estimated £7.4 billion ($11.4 billion).

Entrepreneur and adventurer Richard Branson is 18th, worth £2.6 billion ($4 billion).

Formula One motor racing head Bernie Ecclestone is 38th, with £1.375 billion ($2.1 billion) to his name. His ex-wife Slavica is also on the list, with the source of her income listed as "divorce."

Former Beatle Paul McCartney is the highest-ranking rocker, with £475 million ($730 million) in the bank.

The list contains 1,007 men and 99 women. There are more than 1,000 individuals on the list because some family members occupy one place together.

Nearly half the billionaires on the list -- 24 out of 53 -- were born outside the UK but live in London or its environs for at least part of the year.

The Duke of Westminster, property tycoon Gerald Cavendish Grosvenor, is the highest-ranking British-born person on the list. He's worth an estimated £6.7 billion ($10.3 billion).

Property is the single largest sector putting people onto the rich list, making up 204 of the top 1,000 spots.

Not only are the rich getting richer, according to the list, but the super-rich are getting super-richer.

The Sunday Times also compiles lists of the biggest donors to charity, based on the percentage of their wealth that the richest 1,000 have given or pledged recently.

Actress Uma Thurman and her partner Arpad Busson were fifth on the charity list, while singer Elton John was ninth.