From Elinda Labropoulou For CNN 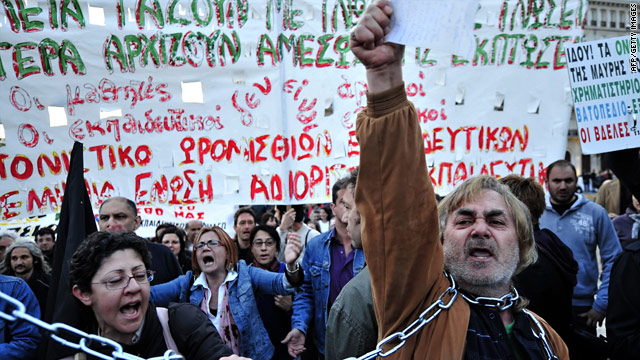 The civil servants' union ADEDY and the General Confederation of Greek Labor (GSEE) announced the general strike. Together, the unions represent about 2.5 million workers, half of Greece's workforce.

The walkout will be their third joint strike against the government's deficit-cutting plans since the beginning of the year.

Many in Greece fear social unrest when the new austerity measures are announced, which is widely expected to happen before May 5.

Greece has started slashing spending and has implemented the austerity measures as a way to reduce its massive deficit. Its national debt of 300 billion euros ($394 billion) is bigger than the country's economy, and some estimates predict it will reach 120 percent of gross domestic product in 2010.

Greece is already in major breach of eurozone rules on deficit management and with S&P's downgrading, which reflects badly on the credibility of the euro.

The junk downgrade of Greece's sovereign debt came as a planned bailout by European nations and the International Monetary Fund faced increasing opposition in Germany -- the largest economy of the 16 nations united under the euro currency.

The euro dropped to its lowest level in nearly a year in Wednesday trading in Asia, where it fell to as low as $1.31.

The junk rating now makes it much more difficult and expensive for Greece to try to raise money and debt in world markets. Standard & Poor 's also reduced the debt credit rating of Portugal, heightening fears of a "Greek contagion" that could spread to other European nations.