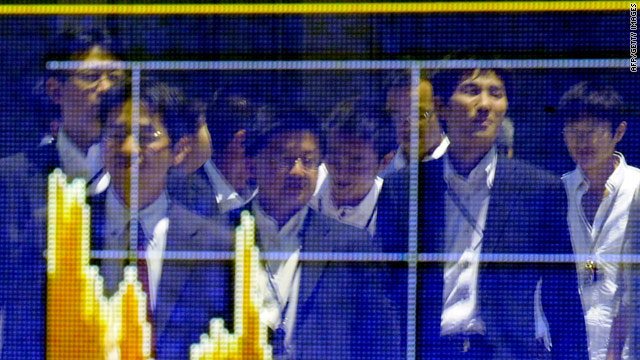 Trading in Tokyo was down by 4 percent on Monday as the global stock selloff that began in the U.S. on Friday continued on soft U.S. jobs data and fears about Hungary.
STORY HIGHLIGHTS

Hong Kong, China (CNN) -- The global stock sell-off that began Friday on the back of worse than expected U.S. unemployment data rolled into Asia trade on Monday morning, as stocks opened sharply lower.

The euro continued its downward slide. It was trading at $1.19 on Monday morning after falling below $1.20 for the first time in four years on Friday.

Traders consider the $1.20 mark a key technical level for the euro.

"It's a pretty big line in the sand, and you don't want to cross it," Phil Streible, a senior market strategist with futures broker Lind-Waldock, told CNNMoney.

Video: Is Hungary the next Greece?

Markets plummeted on Friday after a monthly U.S. jobs report said employers added 431,000 jobs in May, below the expected increase of 500,000.

Euro jitters continued with fresh concerns that Hungary will join the growing list of European countries saddled by debt. The markets were spooked after Peter Szijjarto, a spokesman for Prime Minister Viktor Orban, was quoted by news agencies as saying Hungary's economy was in a grave situation and that a default was possible.