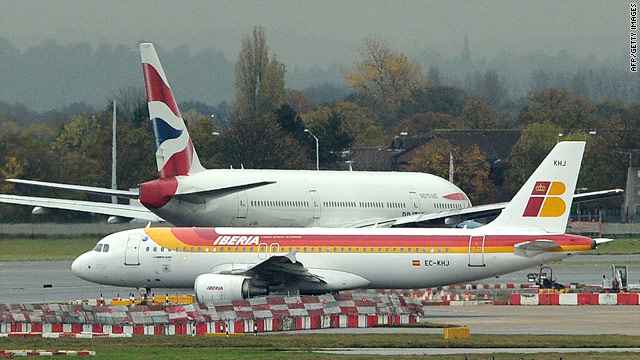 BA says a merger with Iberia would create an airline with 419 planes flying to 205 destinations.
STORY HIGHLIGHTS
RELATED TOPICS

Brussels, Belgium (FT.com) -- Brussels competition officials have formally cleared the global tie-up between British Airways, American Airlines and Spain's Iberia as well as giving a green light to the merger between BA and Iberia, saying it would not significantly impede competition in Europe.

The moves were welcome by Willie Walsh, chief executive of British Airways. The global alliance still needs a final green light from the US authorities, but Mr Walsh said that the EU approval was an "important and vital step forward".

"The high number of new services on London to US routes since the open skies agreement demonstrates that Heathrow is open. Between us, we have agreed to make available Heathrow slot pairs for our competitors to use on services to the US. This is a pragmatic decision, so that we can get the joint business up and running as soon as possible. The slot commitments provide a further guarantee that there will be no possible loss of competition as a result of our joint business", he said.

The move comes after more than a year of analysis. The European Commission first announced that it was looking at the alliance in April last year, along with the rival Star Alliance, which includes United Airlines, Continental Airlines and Lufthansa.

At the time, the commission said that the level of co-operation envisaged between BA, American and Iberia appeared to be more extensive than among the alliance members generally -- and stretched to joint management of schedules, capacity and pricing on transatlantic routes, as well as revenue-sharing on these routes.

Officials were anxious to find out whether the co-operation would generate offsetting consumer benefits.

But in February, officials in Brussels started consulting on concessions the three carriers offered to address potential anti-competitive implications of the deal, and in March put these out for public comment -- a move that signalled likely eventual approval for the deal.

Under the concessions offered by the airlines, seven daily slot pairs will be made available to other carriers. These will comprise three on the London-New York route, two on London-Boston and one on each of London-Miami and London-Dallas. This will allow one or more competitors to operate a total of 49 return flights between London and the four US destinations a week. On the London-New York pair, the carriers will also provide the competing carrier with slots at New York's JFK airport.

In addition, the three airlines will provide access to their frequent-flyer programmes on the relevant routes; allow the combining of fares, so that competitors can carry passengers one way on their own planes and back on the alliance's flights; and conclude special pro-rate agreements, making it easier for a passenger to connect from the alliance's short-haul European flights to a competitor's transatlantic flight.

The commitments, which are legally binding, will run for 10 years.