By Teo Kermeliotis for CNN 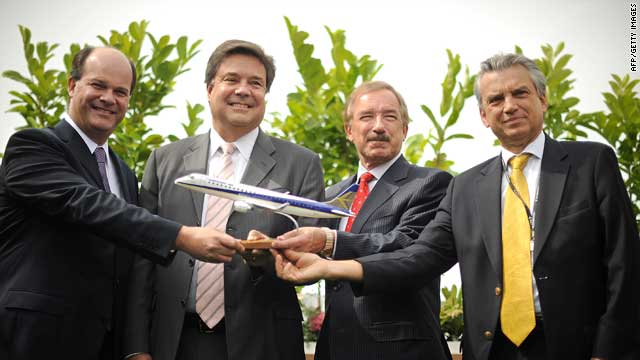 Air Lease Corporation's Steven Udvar-Hazy (second from right) with Embraer executives following a deal for up to 20 E-Jets.
STORY HIGHLIGHTS

London, England (CNN) -- A total of $47 billion worth of deals were struck this year at Farnborough Airshow, the event's organizers announced Friday.

The figure, although well below 2008's record-breaking $88.7 billion worth of orders, is seen as a sign of optimism for the recession-hit aviation industry.

"To see over $47 billion dollars worth of business done and the quality of the business transactions at the show is a testament to the endurance of our sectors, their positive contribution to UK and world trade as well as the significance of the show itself," said Ian Godden, chairman of A|D|S, the UK's AeroSpace, Defense and Security trade organization in a media release.

This year's Farnborough show, held in Hampshire, south England, also marks an improvement compared to 2006, where $42 billion worth of orders were recorded.

The biennial affair saw the return of air leasing companies in the spotlight, with aviation mogul Steven Udvar-Hazy making a dynamic comeback with his new venture, Air Lease Corporation, striking a series of multibillion deals with Boeing, Airbus and Embraer.

GEKAS, the commercial aircraft leasing and financing arm of General Electric, also embarked on a spending spree, announcing deals with Airbus for 60 A320 family aircraft and Boeing for 40 Next-Generation 737-800s.

Other notable contracts include Richard Branson's Virgin America order of 40 Airbus A320 -- in a deal worth around $3 billion -- and Dubai-based Emirates Airline order of 30 Boeing long-range 777-300ERs, worth $9.1 billion.

As of Thursday, industry leaders Boeing and Airbus

had won 237 jetline orders estimated to be worth around $28 billion.

According to A|D|S, 1450 exhibiting companies took part this year in the world's largest air show, with more than 120,000 visitors on trade days.

as well as the in-flight demonstration of Airbus's new military transport plane, the A400M.

The organizers expect a further 160,000 people to visit Farnborough on the forthcoming public weekend.