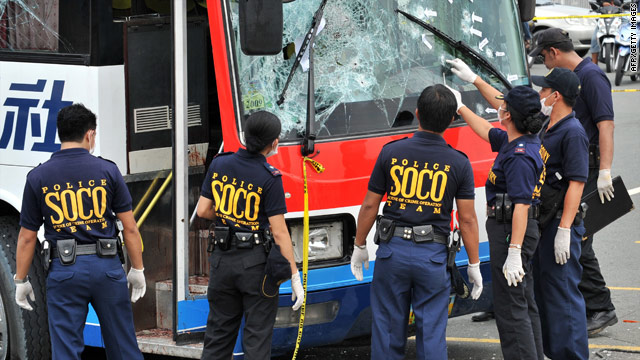 Philippine forensic experts look for evidences on the windshield of the tourist bus in Manila on August 24.
STORY HIGHLIGHTS

(CNN) -- An isolated incident involving a lone gunman in Manila has turned into an international incident that is proving the first real test of newly elected President Benigno Aquino.

As such, the leadership in Manila suddenly finds itself suddenly in league with multinational corporations like BP and Toyota who watch their credibility erode as missteps are magnified before a global audience.

"Organizational effectiveness shows up most dramatically when dealing with issues related with security," said Dane Chamorro, managing director of Greater China for Control Risks, which advises companies on economics and security issues. "This demonstrated in a very dramatic and tragic small-scale way larger problems that are much more widespread."

As the live broadcast events of Monday slid into tragedy, ire at the outcome shifted quickly from the gunman to the government.

"People were looking to the government to act in a matter that demonstrated competence and professionalism, and that wasn't apparent," said Michael Alan Hamlin, a Manila-based marketing consultant and author of "High Visibility."

Hamlin said there were fundamental errors by police on crowd and media control, which may have helped turn events bloody; witnesses said the gunman, Rolando Mendoza, became agitated after watching police arrest his brother from a television on the bus.

Police waited more than an hour after the first shots before launching their assault on the bus. "There were many times when they could have easily taken him out (before)," Hamlin said.

Basic communication at the scene before the shooting started was not focused on the task at hand -- securing the hostages safe release.

"Various spokesmen were talking about the potential impact (of the incident) on tourism, when obviously the message that need to go out was, `Our first focus and only concern right now is for the hostages,'" Hamlin said.

In the wake of the incident, the Philippines National Police released a statement that included a laundry list of ways police on the ground fell down on the job, including: 1) poor handling of the hostage negotiation; 2) side issues and events that further agitated the hostage-taker; 3) inadequate capability, skills, equipment and planning of the assault team; 4)improper crowd control, and inadequate training and competence of assault team leader; and 5) non-compliance to media relations procedures in hostage situations.

Hong Kong Chief Executive Donald Tsang's complaint that he couldn't get President Aquino on the phone also ratcheted tensions between China and the Philippines.

"It's an isolated incident and I think the government needs to think of a way to make sure that's understood -- that there's not some lawless situation in the Philippines and it's not a terrorist act," Hamlin said. "It involved foreign guests, who made it an international incident -- it wouldn't be resonating around the world right now if it involved only locals."

Still, the incident resonated abroad because so many Philippines nationals live and work abroad -- an estimated 10 percent of the Philippines nearly 100 million population live and work abroad. Watching the incompetence unfold at home underlines why low-skilled laborers are wooed away to Hong Kong to work as domestic helpers, and why high-skilled engineers are lured to Dubai or skilled nurses flock to jobs in the United States, said Chamorro, the risk analyst.

"When they lose their best skilled people, that's a huge obstacle -- they really need these people at home," Chamorro said.

To gain a foothold of credibility with its own populace, the Philippines government should focus on improving basic government services benchmarked against other Southeastern Asian nations.

"For example, in Thailand there is successful mail delivery in three separate languages. Now, there is certainly corruption in Thailand, but the post office works. That is not true in the Philippines," Chamorro said. "Education, policing, mail -- does it seem to be working? If not, there is a gap, and nature will fill that gap with something else."