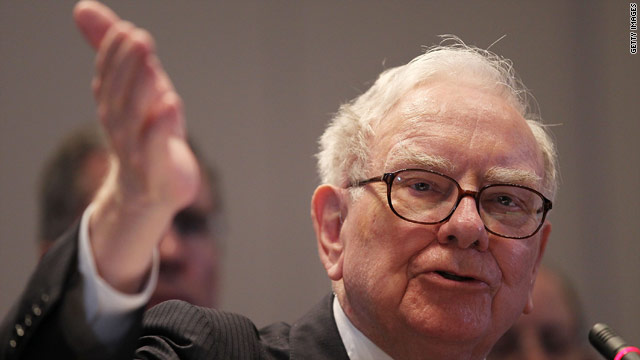 The 'world's greatest investor' turns 80 on August 30. Warren Buffett and his investments through Berkshire Hathaway have amassed a personal fortune estimated at $47 billion.
STORY HIGHLIGHTS

(CNN) -- Warren Buffett has built a career based on contradictions.

During the greatest explosion of the global capital markets -- with more investors flipping stock in quick trades -- Buffett has amassed one of the world's largest fortunes by looking for bargains and holding onto them.

As chief executives are excoriated for wallet-bursting salaries, Buffett's salary as chairman of Berkshire Hathaway Inc. has been capped at $100,000 for years: His personal fortune is wholly dependent on the fortune of his company.

While the elite have flocked to cities such as New York, London and Hong Kong to build their fortunes, Buffett has accumulated his wealth from the backwater of Omaha, Nebraska, going home to a nondescript two-story home he lived in for decades before Warren Buffett became "Warren Buffett."

And, perhaps most interesting as Buffett celebrates his 80th birthday on Monday as one of the world's richest men, he emerged from the Financial Crisis not only with his reputation intact, but his image burnished: A capitalist hero wearing the white hat, while governments, politicians and companies struggle to regain their pre-crisis reputations in the public eye.

"He is globally respected because people are fascinated with the rich, but at the same time they would like to think it's possible to become rich without it gotten through immoral means -- that you have to cut corners, that you have to be ruthless," said Alice Schroeder, author of "The Snowball: Warren Buffett and the Business of Life."

"This is one man who raises the tantalizing possibility that that's not true, that you can become rich without compromise," Schroeder said. "He has an image of being an ethical paragon -- that's an ideal a lot of people would like to believe in."

His reputation was solidified in 2006 with his pledge to donate his wealth -- estimated this year at $47 billion -- to charity, and his efforts this year with Bill and Melinda Gates for the world's billionaires to donate half their fortunes.

"He certainly doesn't seem to fit the Rockefeller mode or model of the tycoon," said Laura Rittenhouse, author of "Buffett's Bites: The Essential Investor's Guide to Warren Buffett's Shareholder Letters." "It's less 'noblesse oblige' philanthropy but a sense of you can't take it with you, and you were damn lucky to have it in the first place -- you have to give it back.

"He is a capitalist who is not a materialist," Rittenhouse said.

But before Buffett's pledge to give it all back, he built it up. The son of a businessman and four-term congressman, Buffett began investing while in high school and throughout college. But one of his largest influences was Benjamin Graham, an economist who taught him at Columbia University who was an early champion of value investing -- buying shares of companies that are underpriced.

The search for value helped propel Buffett's career and fortune through a wide diversity of industries with impeccable timing. "He studies the concept of 'buy low', 'sell high' as he would nuclear physics ... he will spend years thinking about every nuance and working at it from every angle," Schroeder said. "He's exquisitely aware of what 'buy low' means in a particular economic time and place, and has shifted in an anticipatory way from grungy industries to media and consumer markets at just the right time."

For Buffett, the need to be loved and feel love is behind this drive to succeed
--Alice Schroeder, author of "The Snowball"
RELATED TOPICS

His sense of value investing has at times seemed counterintuitive. In 1988, he spent $1 billion for an 8 percent stake in the Coca-Cola Co., which at the time didn't seem much of a bargain. But as the company exploded with the opening of global markets, that stake is now worth $11 billion.

In the late 1990's, people perceived the "Oracle of Omaha" was missing the boat as he didn't buy into the explosion in technology companies. It turned out instead Berkshire Hathaway missed the dotcom Titanic -- as the S&P 500 lost 43 percent of its value from March 2000 to March 2003 in the wake of the dotcom implosion, the value of Berkshire investments increased 25 percent.

Perhaps the greatest measure of Buffett's investing acumen is the price of stock in his company. When he bought into Berkshire Hathaway in 1965 it was about $18 a share -- this week the price was hovering around $115,000 a share. Its annual return rate to investors since 1964 has averaged 20.3 percent, compared to the 9.3 percent return rate of the S&P.

In 2004 shortly before her death, his wife, Susan, was asked what Warren Buffett's legacy would be. Her answer: His annual letters to stockholders.

That honesty in his missteps is one reason why Buffett makes fewer of them than others, said Joseph Hallinan, author of the book, "Why We Makes Mistakes," which was published in the UK as "Errornomics."

"Overconfidence is the greatest cause of mistakes for executives ... there's a perception that they kill the weak, and if they show any lack of confidence they can be destroyed," Hallinan said. "The exception is two words: Warren Buffett. If you read his annual letters, he admits in very plain terms making some big mistakes. That's amazingly refreshing in the corporate world."

For example, Buffet's 1993 purchase of the Dexter Show Company for $433 million. In his letter to shareholders in 2008, he admitted "to date, Dexter is the worst deal that I've made." The mistake about the durability of the business was compounded by the fact it was purchased in Berkshire stock -- meaning, over time, the $433 million cost the company $3.5 billion as Berkshire's share price rose.

Acknowledging an error and analyzing why it was made is a cognitive exercise most executives prefer not to make. "He's very well calibrated in understanding what he knows and what he doesn't know ... he's optimistic, but not overconfident," Hallinan said.

Buffett's image as a virtuous tycoon is, in many ways, his own creation, Schroeder said. "Like many oversized, towering figures, he is driven by a tremendous drive and insecurity, otherwise he would be content to stay back at home," she said. "For Buffett, the need to be loved and feel love is behind this drive to succeed. When he was a child, he never felt love -- now he has 40,000 people coming to see him at the (Berkshire) annual meetings.

Many famous CEOs have the same dynamic, Schroeder says, yet they still come across as tyrannical. "Why is he so well liked and respected? He's been working at that for years -- he knew that if he was just rich, he'd be perceived as a robber baron."

Now Buffett has made his greatest investment, a $26 billion investment in the railroad Burlington Northern Santa Fe Corp., what Buffett has called his "all-in bet" on the U.S. economy. Will that pay off? Buffett is betting his track record that it will.