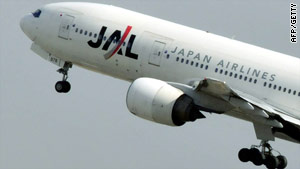 The airlines' bankruptcy is one of Japan's largest corporate failures.
STORY HIGHLIGHTS

(CNN) -- Japan Airlines on Tuesday submitted its bankruptcy plans for approval, a proposal that includes slashing roughly one-third of its workforce.

The plan includes the loss of roughly 16,000 jobs; a 521.5 billion yen ($ 6.2 billion) debt waiver, mainly from financial institutions; and a 350 billion yen ($ 4.2 billion) investment in the airline by the state-backed Enterprise Turnaround Initiative Corp. of Japan.

The airline submitted the plan to the Japanese government and Tokyo district court for approval.

The airline -- one of Japan's largest-ever corporate failures -- proposes cutting 45 money-losing domestic and international routes from the end of September through the end of March 2011.

The airline collapsed under a mountain of debt, accumulated by ballooning pensions and unprofitable flights.

It has chosen American Airlines as a U.S. partner and is focusing on trans-Pacific routes to boost revenue.

After overhauling itself and improving its balance sheet, the airline aims to go public again by the end of 2012. It hopes to return to profitability by the end of fiscal 2010, or March 2011.

Under the proposal, all current Japan Airlines shares would be reduced to zero values and new airline shares would be owned by the state-backed Enterprise Turnaround Initiative Corp.

The airline filed for bankruptcy on January 19 and delisted in February.