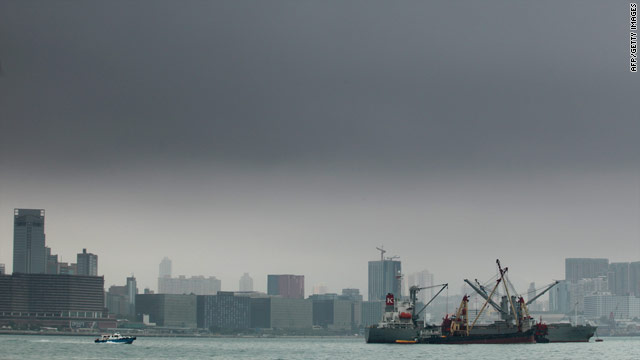 Hong Kong, China (CNN) -- Many Hong Kong residents blame factories in Southern China for the heavy pollution that hangs over the city, but local polluters are also to blame, including the ships that regularly pass through waters close to the congested city.

Much of this shipping traffic still runs on bunker fuel, a heavy fuel derived from crude, which according to local NGO Civic Exchange emits "large quantities of highly toxic sulfur dioxide."

As of Tuesday, the company will use low-sulfur fuel while at berth in the Chinese territory.

Maersk says the change will lower its emissions of sulfur oxides and particles by at least 80 percent and cost the company about one million dollars a year.

"In South China and in Hong Kong, you have a lot of maritime activity taking place in close proximity to centers of population," Maersk Line's North Asia CEO Tim Smith told CNN.

"Our fuel could have an impact on public health, if we can sort this out, we think we are making a good contribution to improving public health generally."

Maersk and the Civic Exchange are urging all Hong Kong carriers to join a voluntary initiative to do the same by the end of the year.

The company is also calling for greater regulation of shipping emissions by the Hong Kong and neighboring Guangdong governments, a move which would create an even playing field for businesses when it comes to costs.

Use of low-sulfur fuels at berth is already mandatory in Europe and in some U.S ports. "The Pearl River Delta has the most people, the most containers and the least effective regulation," says Civic Exchange's Veronica Booth.

CNN asked Hong Kong's Environmental Protection Department if it is considering making the use of low-sulfur fuel a requirement for all shipping vessels. It responded with a statement, reading in part, "We are keenly aware of the importance of addressing emissions from vessels to further improve our air quality. The voluntary switch will provide useful information for assessing the practicability of mandating the fuel switch."

Any positive moves on air quality will find a welcome audience among Hong Kong's population of seven million.

Residents have struggled through a particularly smog-filled month, with the government's Air Pollution Index reaching "very high" on multiple days.

The index measures the concentration of air pollutants including nitrogen dioxide, sulfer dioxide and carbon monoxide.

The government warns a "very high" reading could cause "some discomfort" for generally healthy people, while people with existing heart or respiratory illnesses may notice a "mild aggravation" of their condition.