Will China say 'salud!' to tequila? 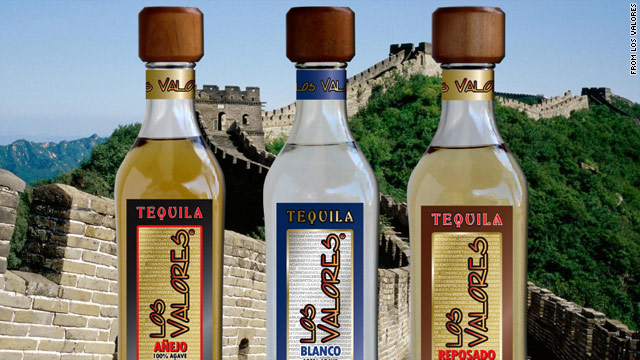 This company ad for Los Valores tequila shows the liquor towering over China's Great Wall. However, due to alcohol content restrictions, the premium tequila has yet to be sold in the world's most populous market.
STORY HIGHLIGHTS

Hong Kong, China (CNN) -- When Armando Rojas and a group of tequila entrepreneurs founded a boutique distillery for premium tequila in 2008, their sights were set on high-rolling neighbors to the north to snatch up their exclusive $70-a-bottle brand.

"We started, like many people, looking towards the U.S., tequila's natural market," Rojas told CNN.

But the makers of Los Valores tequila didn't count on the Great Recession drying the thirst of U.S. tipplers for top-shelf spirits. So instead of looking north, Rojas and his partners are placing their hopes on drinkers in the east.

As China has become the world's largest market for automobiles and beer, and has a skyrocketing wine market, Mexican distillers are hoping to educate Chinese consumers on the joys of tequila.

The Hong Kong Trade Development Council estimates that wine imports into mainland China will reach $870 million within the next decade. Hong Kong and China combined drink 60 percent of Asia's bottles.

Mexican authorities took note of this, trying to emulate other countries' success in wines by turning China onto Mexico's most famous beverage. But this challenge could be larger than what it seems.

"Asia is a very interesting market for Mexico," said Julián Llaguno Gurza, a representative of the Ministry of Agriculture promoting Mexican food and beverage exports into Asia.

In 2009, 79 percent of tequila exports went north, according to the National Chamber of the Tequila Industry of Mexico. But as Los Valores was distilling its tequila, an economic storm was brewing to the north. In 2009 Mexican exports to the US plunged 26 percent to $185 billion, according to the United Nation's Economic Commission for Latin America and the Caribbean.

But so far, the reality is sobering for Rojas and his partners: Their goods can't reach most Chinese drinkers.

Both governments, however, recently ironed out this problem, Mexican officials say. "We've had a very positive response, working on a solution to the regulation that limits tequila. Nevertheless, there was no date given by the Chinese government," Milton Alatorre, Asia Representative for the Tequila Regulation Council, told CNN.

Meanwhile, Rojas is selling his spirits in Hong Kong -- a former British colony that returned to China in 1997 and has a high degree of autonomy -- to get a toehold in the China market. The city is a market of about 7 million people.

"Generally speaking, Hong Kong is a small market," Harder told CNN, "but it acts as a fantastic platform for Asia and especially mainland China, which would be a huge huge market."

Hong Kong bought $1.2 million worth of tequila in 2009, according to official Mexican figures. Meanwhile, following a change in regulation, wine booms in the ex-British colony, as it consolidates as a regional entrepot. "Total wine imports into Hong Kong increased by 80 percent in 2008 and by a further 40 percent in 2009, reaching a value of $500 million," Parker Robinson, head of corporate communication of the Hong Kong Trade Development Council, said in an email. About a third of the wine that came into Hong Kong in the first half of this year was re-exported to mainland China, Robinson said.

Rojas trusts his bottles will enter the mainland later this year, following other Mexican luxury products like abalone and lobster. Without a final date for the approval by Beijing,however, Rojas for now has to watch wine exporters toast their mainland success from a distance.

The company's plant employs 40 people in San Juanito de Escobedo, a dry, coyote-filled valley in Western Mexico with a population of 8000. This is where tequila made from blue agave plants were first distilled by Indians more than 1500 years ago, Rojas says.

"Our cultural roots come in each bottle," Rojas said with passion, "when you open a bottle of tequila, you can smell those religious ceremonies where only (Mayan) priests or warriors going to battle were anointed with tequila."

The full production process of a high quality bottle may take more than 13 years, from the blue agave plant to an aged drink that has its characteristic golden tones, gentle aroma and cognac-like texture, Rojas said.

Once Rojas' high-powered tequila is allowed into the mainland market, the liquor has a ways to go to find the popularity now enjoyed there by beer and wine. While CNN was interviewing Rojas at the Hong Kong Food Fair a local trader approached asking if a bottle of white tequila was actually vodka.

"There is zero tequila culture (here)," Rojas said in despair.