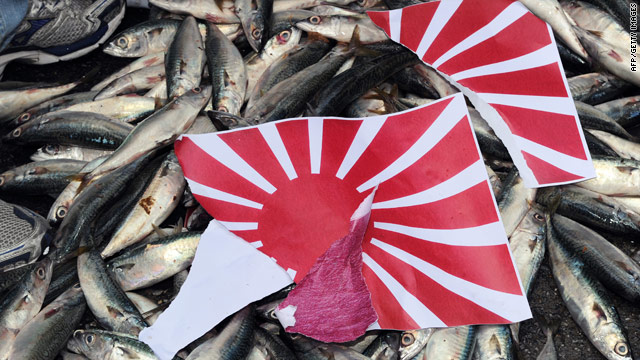 A torn apart Japanese 'Rising Sun' flag is placed on dead fish during a demonstration in front of the Japan Exchange Association - Japan's representative office on Taiwan- on September 14 over the continued island dispute between Tokyo and Beijing.
STORY HIGHLIGHTS

(CNN) -- The husk of a dead volcano protruding from the East China Sea has become the battleground between the two mightiest economies in Asia.

At stake are potentially lucrative gas drilling rights in waters claimed by China and Japan. But the outcome of the territorial dispute may hinge on the medicinal herbs of a Chinese empress, the collection of bird excrement by the Japanese and the definition of what really makes an "island."

The latest controversy over the simmering dispute erupted when Japanese patrol officers arrested the captain and crew of a Chinese fishing boat earlier this month near the disputed islands -- known as Diaoyu in China and Senkaku in Japan. The crew was released, but the Chinese captain remains in custody. He is to appear in a Japanese court on charges that he rammed two Japanese boats with his vessel .

The economic repercussions have been immediate. The Chinese government cut off high-level talks with Japan on coal and increased commercial flights between the countries. The dispute also threatens planned talks on a 2008 agreement to jointly develop gas fields located near the disputed islands and in other parts of the East China Sea.

Run-ins between China and Japan over the sovereignty of the islands are nothing new. Japanese nationalists held demonstrations on the island back in 1990. But what is most worrisome to long-time watchers of the dispute is the assertiveness of both governments in the current fracas.

"A big difference this time: These incidents aren't being sparked by nationalists," said James Manicom, an expert on maritime disputes at the Balsillie School of International Affairs in Waterloo, Canada. "In the past, the most important thing (for Beijing and Tokyo) was to try to make this issue go away and to keep a lid on nationalist sentiment. Japan in particular now sees (territorial sovereignty) as a vital issue economically and as a national security issue."

"It's different in terms of the context of China rising and Japan in bit of a travail both economically and politically," said Mark Valencia, a fellow at the National Asia Research Program.

What makes an island?

The dispute boils down to where lines can be drawn in the ocean for commercial use. International law allows for a nation to claim exclusive economic rights to fish, oil and mineral reserves up to 200 nautical miles from the shore.

If Japan owns (the islands), then it gets a heck of a lot more (area) to develop
--Mark Valencia, National Asia Research Program
RELATED TOPICS

"The islands are a pile of rocks determining where the boundary may be drawn," said Dr. Wu Kang of the East-West Center in Hawaii. "The overriding issue is a territorial issue."

"If Japan owns (the islands), then it gets a heck of a lot more (area) to develop what is increasingly thought to be a very gas-rich area that hasn't been explored very much at all because of this ongoing dispute," Valencia said.

"An island has an economic life of its own and can support human habitations; these are extinct volcanoes," Valencia said.

Both sides say they have a history of economic use of the islands. China points to a 1893 decree by Dowager Empress Cixi, giving the island to a Chinese medicine-maker for use in cultivating herbs. Japan points to 19th century use on the island to collect seabird feathers and guano. Japanese nationalists traveled to the islands in 1990 and 1996 to build a lighthouse and further the economic claim for sovereignty.

The islands are considered part of Japan based on U.S.-Japan security treaties. Though analysts don't think the current tension will escalate and draw in the U.S. military treaty obligations, the agreements add murk to an already muddy territorial dispute.

With nationalists in Japan and China watching, officials in Tokyo and Beijing will face increasing pressure not to blink in the current conflict. The Ishigaki Summary Court in Okinawa decided that the captain will be held at least until September 29, the Japanese Coast Guard told CNN on Monday.

"Both sides are getting themselves in real deep here. Someone is going to emerge with egg on their face," Valencia said.