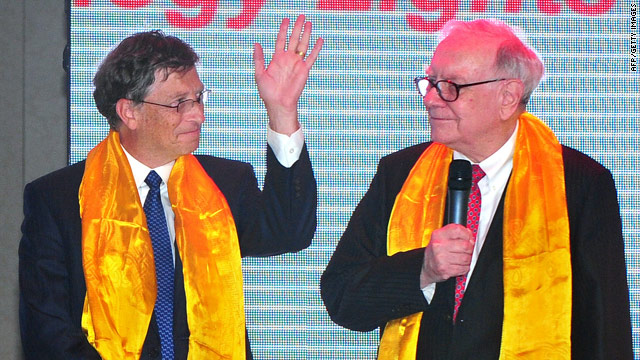 Beijing, China (CNN) -- At a recent Beijing dinner, Bill Gates and Warren Buffett, the world's richest philanthropists, tried to convince some 50 of the 189 known Chinese billionaires (in US dollars) that "it's good to give."

Buoyed by what he saw as the "energy and interest in philanthropy" among their Chinese guests, Gates said the American and Chinese billionaires face some common issues. "I think the obstacles are similar to what everybody sees in the United States, which is, you want to make sure your gift is going to have a huge impact."

Gates is off target.

Most Chinese tycoons nowadays prefer to keep a low profile. They tend to give to their employees, local schools, hospitals, health clinics and other community-based charities. While American billionaires prefer to give to high impact global concerns like the environment, HIV-AIDS or poverty in Africa, Chinese billionaires focus on local issues with less grandiose impact.

In fact many Chinese business tycoons I know try to put local efforts together in response to emergencies, like the Wenchuan earthquake in 2008 and the mudslide disaster in Gansu province in August. I am sure as they get older and become more secure, their giving will increase.

Philanthropy, of course, has a long tradition in China. Before 1949, rich people traditionally gave to the less fortunate to gain prestige, uphold local reputations and honor their ancestors. During the communist regime, however, the state was viewed as the instrument for sharing the wealth. Philanthropy was regarded as feudal so the authorities tried to eradicate the tradition. With China's economy projected to overtake the United States in the near future and the widening income disparities in the country becoming a social issue, the appeal of Gates and Buffett for philanthropy might gain some traction if applied locally.

They are also wary of appeals for charitable giving. Quite a few of the billionaires invited by Gates and Buffett, in fact, were said to have been reluctant to come because they were afraid they would be asked for donations. Many among those who turned up for dinner were more interested in having their pictures taken with the two American billionaires than learning more about global philanthropy.

For some super-rich, the Buffett-Gates invitation put them in an awkward position. In China the government still wants to be the arbiter of charity, keen to present itself as the omnipresent, omnipotent source of kindness. As such donating in China effectively means blindly handing over their wealth to the government. "There are still serious doubts if philanthropic donations could be put to good use, as intended," an invitee told me two days ahead of the dinner date. "There is little transparency and accountability here."

The distrust is mutual. Even as it tolerates some private charitable networks, the government views them as politically dangerous. That perhaps explains, long-time China-watcher Anne Stevenson-Yang tells me, why some of the Chinese media coverage of the Buffett-Gates dinner has been disparaging, some calling the event the "Barbie Dinner" -- "Ba" for the first Chinese character in "Buffet" and "Bi" for Bill.

Warren Buffett was quick to point out the difference between American and Chinese billionaires. He said: "Some people just prefer to be very private and they would rather not have the world know they have a lot of money. They may worry about the safety of their children. Some worry that their motives will be misunderstood, that people will think that they are doing it to sort of cleanse their reputation. The emphasis is a little different, but the privacy concern--'do I really want my name in the paper and everybody talking about it?'--we hear that in both countries."

In China, there is also the unspoken worry that public attention on their whopping wealth could attract unwanted scrutiny by government agencies, especially by the dreaded taxmen and police. In the past 30 years, we have seen a string of cases of high-flying business tycoons falling into disrepute due to allegations of corruption, bribery, insider trading and tax evasion. Huang Guangyu, former chairman and CEO of Gome is now serving a long jail term for alleged bribery and insider-trading. He used to top the list of China's richest.

Ever the optimist, Bill Gates sees a possible change of attitude among China's new crop of billionaires. He said: "Because the wealth here is so new a lot of these non-profit groups have not been developed, and the notion of 'what is the role of government versus philanthropy', that's still being developed."

Both Gates and Buffett said they understand the concerns of Chinese billionaires but challenged their guests to do more for philanthropy. Buffett expressed the hope that their guests would join their appeal and that their efforts "will have a good effect on people 50 years from now."

From the reactions of most of their guests, it may be a longer wait.