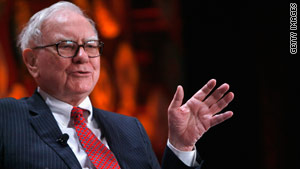 Warren Buffett is known for his interest in social values.
STORY HIGHLIGHTS

(CNN) -- New research shows that managers can benefit from bringing values into the workplace, as long as they do it right.

A study of CEOs and their middle management in China found that employees were happier, and more likely to stay at a company, if their leaders clearly indicated social values -- but also followed through in their private actions.

The study of CEOs and their underlings' happiness was carried out by W. P. Carey School of Business Management Professor Anne S. Tsui, Ping Ping Fu of the Chinese University of Hong Kong, Jun Liu of Renmin University of China, and Lan Li of Chinese Entrepreneur Survey System.

Over the course of five years, Tsui and her collaborators studied CEOs and their subordinates at 42 companies in China. They asked both groups about the CEOs' perceived values, and measured middle managers' commitment to the company or likelihood of jumping ship.

They found that employee loyalty related to whether a leader's personal social values matched his or her outward statements.

Tsui said that because corporate leaders communicate their values through every-day actions, typically middle managers can't help but pick up on their bosses' values.

"They listen to what they say, they look at the decisions they make, sometimes it's very subtle," she told CNN.

If you're lucky enough to go through the ranks and selection, you've already proven that you are able to do the job. The question is, how do you define the job.
--Anne S. Tsui, W. P. Carey School of Business Management Professor
RELATED TOPICS

"If you're lucky enough to go through the ranks and selection and (become a CEO), you've already proven that you are, in most cases, able to do the job. The question is, how do you define the job," she said.

"Researchers and companies that do executive training know that executives who are very charismatic have a strong vision about the company and they talk a very good language of rallying the whole company towards this mission, which is 'let's do it all for the company,' and 'it's good to do things for our society.'"

But if the CEOs signal that their underlying motivation is more about improving the bottom line in the short term -- bringing payout for themselves -- Tsui found that lower-level management responded negatively to the dissonance between stated goals and the actions of their leaders. And that dissonance can have practical effects on a business.

"In this very competitive world where the middle managers are a scarce resource and they are subject to prey by other companies, you are going to lose your middle management. That is where the potential cost to the company is," Tsui told CNN.

The researchers found that social values needed to coexist with a hard-driving understanding of the bottom line. But if a board is trying to pick between two candidates for a top post, Tsui told CNN, ambition might not be as good a measure as collective values.

"You can't just select people who are Mother Teresas and Mahatma Ghandis. It is a given they need to know how to make money," she acknowledged.

"But beyond that, if they can't see anything about making this world better, making a company responsible while it's making a lot of money, which one would you select?"