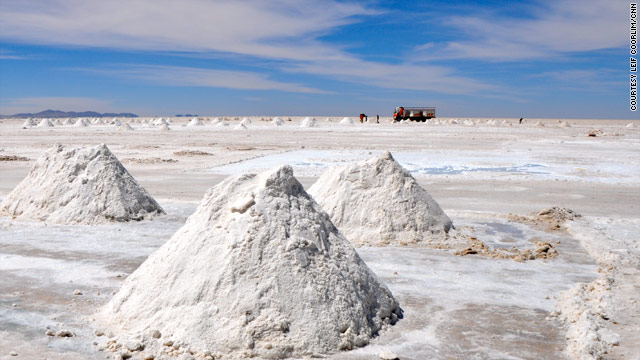 Salar de Uyuni, Bolivia (CNN) -- "Back to the Future" is celebrating its 25-year anniversary. While we don't yet have the time-traveling Deloreans, the world is getting ready for the next automotive revolution.

Electric vehicles are on the way. General Motors plans to release the new Chevy Volt in December 2010. While it isn't a pure electric vehicle (it has a gas-powered engine that kicks in after about 60 kilometers), most commuters using the plug-in vehicle could go quite some time without stopping at the petrol station.

During a test drive of the new Volt outside Detroit, Michigan, Tony Posawatz, the Volt's lead engineer, told me that "when you look at the growth that exists in countries like China, Brazil, India, Russia et cetera, we may add by 2020 300 million new cars to the planet.

"We'd like many of those new cars, if not most, to be electrically driven."

Industry analysts predict that by 2020, one in 10 vehicles in the world will run on battery power. Most -- if not all -- manufacturers are adopting lithium-ion as their battery of choice.

If that prediction turns out to be true, experts say demand for lithium will outstrip supply in less than 10 years, unless new sources are located.

One potential source exists high in the Bolivian Altiplano, where the Andes Mountains are at their widest. Getting there isn't easy. We flew into La Paz, the highest capital city (in altitude) in the world and took a few hours to get acclimated.

Grinding headaches, loss of breath and other symptoms associated with altitude sickness welcome most visitors stepping off the plane in La Paz. We'd carry those "gifts" for several days.

Salar de Uyuni [is] the largest salt flat in the world. I have to admit, it's pretty awe-inspiring ... a vast ocean of white.
--Leif Coorlim, CNN
RELATED TOPICS

From La Paz, we set out in four-wheel drives to the Salar de Uyuni, the largest salt flat in the world. I have to admit, it's pretty awe-inspiring. I'd never seen anything like it -- a vast ocean of white.

The closest place I could compare it to would be the surface of the moon or the Arctic circle, I would imagine.

The Salar extends more than 10,000 square kilometers (which makes it about the size of Lebanon, if you're scoring at home) and contains more than 10 billion tons of salt.

But what has attracted the attention of mining corporations and car manufacturers, is what's located underneath the surface, in the brine.

Lithium, if you're unfamiliar with it, is the lightest known metal and it has a number of uses. It can run your Blackberry, power your iPod and even treat depression. But its greatest function could be yet to come -- its ability to potentially wean the world's cars off petroleum, as it powers the first generation of mass-produced, mass-marketed electric vehicles.

According to the United States Geological Survey, the leading science organization providing information on the natural resources, the Salar de Uyuni may contain 28 percent of the world's supply of lithium.

That could provide an immense economic opportunity for a country like Bolivia, currently one of the poorest nations in South America, where nearly two thirds of the population lives in poverty.

One of the most interesting elements I came across while researching this story was the theory of the "resource curse." Put simply, it states that the countries with the largest endowments of natural resources often fare worse economically, socially and politically, compared with other countries with fewer resources.

Bolivia has a long history of mining, and much of its wealth has been plundered for centuries.

Jose Pimental, Bolivia's Mining Minister, framed it this way, "Bolivia is a country with a mining tradition for gold, silver, tin, zinc." But he added, "The fortunes derived from mining are well known but [now] you mostly see empty mine shafts and immense cemeteries."

The country has plans to develop the technology to produce lithium-ion batteries, rather than just provide the raw mineral resource for the benefit of developed nations.

In the past, President Morales has said he'd like to one day see Bolivia building electric cars.

But given the country's current lack of infrastructure and economic challenges, that prospect, at least in the near future, may be as unlikely as a flying Delorean.