Official: China won't use 'rare earths' as a bargaining chip 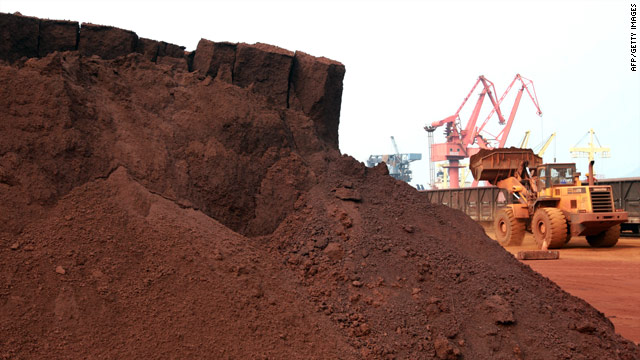 (CNN) -- China bid to defuse a percolating crisis Thursday, vowing not to use "rare earth" minerals as a bargaining chip in world trade discussions and not to cut exports any more next year, state-run media reported.

Earlier this month, reports surfaced that China has significantly decreased imports of 17 rare-earth minerals to the United States and Europe. Such elements -- of which 97 percent produced in 2009 came from China, according to the U.S. Geological Survey -- are key in the construction of many high-tech products, including aircraft, electronics and magnets. They're also key to clean-energy products such as wind turbines and cars, a market that's seen demand grow significantly.

The prospect of a cutoff, or even a draw-down, of such minerals by China put many businessmen and politicians on edge.

But during a press conference Thursday in Beijing, a spokesman for China's Ministry of Industry and Information Technology said the Asian nation would work with other countries and international bodies -- including the World Trade Organization -- as it sought to resolve "disputes" over rare-earth minerals, according to a report in the state-run China Daily.

"China will not use rare earths as an instrument for bargaining," Zhu Hongren said. "Instead, we hope to cooperate with other countries in the use of rare earths on the basis of win-win outcomes and jointly protect the non-renewable resource."

Zhu said that China was dealing with environmental problems tied to excessive mining of such rare-earth minerals -- a driving reason behind the drop in exports. Chinese officials said that, at the current rate of production, some reserves of medium and heavy rare-earth minerals may run out after 15 or 20 years, according to the China Daily article.

The report said that China had cut its exports of certain rare-earths, with smuggling even further cutting into already dwindling reserves. But Zhu denied reports that export quotas would be cut further next year.

U.S. Secretary of State Hillary Clinton is currently on a seven-nation Pacific tour that includes a stop in China. The rare-earth dispute, as well as others involving trade, are among the top items on the agenda.

U.S. officials have been pushing China to allow its currency to rise against the dollar and level the international export playing field. And last month, the U.S. imposed tariffs on Chinese tires. China responded by announcing tariffs on U.S. chickens. But the rare-earth dispute is seen as one of the most important in the nations' ongoing trade talks.