'Undercover Boss': The inside story 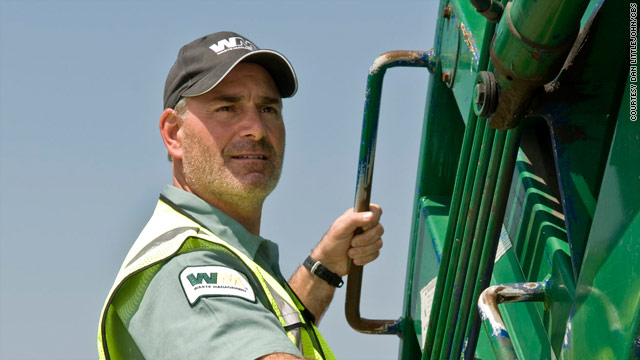 Waste Management's Larry O'Donnell was the first boss to go undercover on the U.S. version of the reality TV show.
STORY HIGHLIGHTS

(CNN) -- A boss dons a disguise, pulls on coveralls and hits the production line. Can he keep up with the workers who make a fraction of his wage?

It's apparently an irresistible question -- one that has spread the reality TV show "Undercover Boss" around the world since its UK premiere last year.

In a new book of the same name written by show creators and producers Stephen Lambert and Eli Holzman, bosses and employees who appeared on the program share the lessons they learned.

Holzman recently spoke with CNN about the show. An edited version of the conversation follows.

CNN: The first U.S. episode of "Undercover Boss" achieved unprecedented ratings for a reality series. Why do you think so many people want to watch CEOs learn about their own companies?

Eli Holzman: With so much finger-pointing at Wall Street and towards the head office and so many CEOs hiding behind their handlers and dragged out kicking and screaming in front of congressional committees -- there was a real desire to have a more intimate dialogue with them, and to get to know them more as people.

And there was a desire for them to humble themselves a little bit. People wanted to take the measure of these bosses -- could they work a long shift? How do they react when they are faced with inequity in the workplace, or the struggles and suffering of people who are not quite so fortunate?

CNN: Given that the show was in some ways an exercise in being humbled, why did CEOs sign on to participate?

[Bosses have] to do nothing but think about their employees and their operations on the ground for an entire week, all day long.
--Eli Holzman
RELATED TOPICS

EH: Particularly for CEOs who have a strong eye on operations, for them understanding their employees and trying to help them become more engaged in their work is a daily pursuit. They realized that even incremental increases -- which might seem very slight -- have a profound impact on the organization.

It's no coincidence that Larry O'Donnell, our first boss, was the chief operating officer for Waste Management Inc. For Larry, who used to spend 200 days a year on the road looking for opportunities to improve, he saw this as a once in a lifetime opportunity to get smuggled into his operation and get a first-hand look.

CNN: What kind of feedback have you gotten from executives who have appeared on the show?

EH: Employee engagement means the difference between someone who cares, who's focused on work, taking a little more pride in it -- and someone who is just punching the clock and going through the motions.

Engagement apparently went way up at Waste Management after the episode, in ways they could measure. O'Donnell had tried so many things, all with an eye to making the workforce engage more -- they have company newsletters and corporate videos, off-site retreats.

But just one episode that was aired outside the reach of their company touched their workers so much more. For some companies, maybe there's a publicity benefit. But I think there was just as much publicity risk.

CNN: What first sparked the idea for "Undercover Boss?"

EH: Stephen Lambert had the idea for this show when he was reading press about the opening of the new British Airways terminal, and there were all sorts of problems.

One journalist mused that if Willie Walsh, the British Airways boss, had gone and worked anonymously and done some of the luggage sorting and basic functions, he would have anticipated some of these problems and headed them off.

But the reporter said it would never work, that Walsh would be recognized. Stephen wondered -- would everyone really recognize the boss, out of context and scruffed up?

CNN: Versions of the show are being planned for countries all around the world. Does the show's concept translate across cultures?

EH: There are things that are slightly different culturally. For instance, Stephen has suggested to me that we in America are much less likely to overtly complain about our work -- there's maybe a certain suspicion of authority here.

On the other hand, I think there's a certain cynicism in the UK as to whether the boss might really be a good guy, whereas in America hope springs eternal -- we're a country of optimists.

CNN: The show implies that change can happen. Is it misleading to suggest that a week of personal experience can change the way corporations treat their workforce?

EH: I feel strongly, and I've seen it first hand, that it can make big changes. If you're the leader of a large company, your time is a precious commodity. There's only so much you can devote to any of the strategic priorities in the company. Imagine an entire week of the boss's schedule, and how precious that is, how many important things they would typically do in that week

The boss probably doesn't do that for many other things in their company all year long. When that much focus is applied, there is a potential for real change to happen.

"Undercover Boss: Inside the TV Phenomenon That Is Changing Bosses and Employees Everywhere" is published by Jossey-Bass.