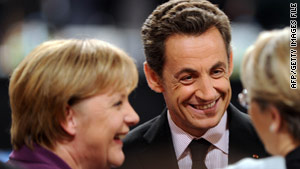 (FT) -- France and Germany, with the support of the European Commission and the European Central Bank, have reached agreement on the central elements of how private creditors will be involved in future eurozone debt crises.

Paris and Berlin were seeking the backing of European Union finance ministers meeting in Brussels on Sunday night, as the bloc accelerated its preparations for a permanent inter-governmental financing facility in a bid to reassure financial markets unsettled by the Irish debt crisis.

Officials said they hoped a deal would convince the markets of the resilience of the eurozone.

The main feature of the proposed new system -- dubbed the European Stabilisation Mechanism -- will be for future borrowing by eurozone members to include collective action clauses that would involve bondholders in any eventual debt restructuring.

The clauses make it easier to reach agreements between creditors and debtors to change the terms of a bond.

"The message to the markets is that it will only come into effect in 2013, and there is nothing in there that the markets do not already know about," a senior German official said. "Collective action clauses are already used in the US and UK."

At the same time, a permanent intergovernmental financing facility will be established to replace the existing €440bn ($583bn) rescue fund, which expires in 2013.

Governments that borrow from the facility would be bound by the sort of strict conditions regarding their fiscal and economic policies that were attached to Greece's bail-out in May.

One potential obstacle to EU-wide approval for the mechanism came from Italy, which, according to French and German officials, argued against collective action clauses fearing it would reduce bond market liquidity.

A central element of the plan is that future debt crises in eurozone member states would be dealt with on a case-by-case basis, rather than according to any automatic mechanism.

"We are not putting in place a default mechanism of any sort," said a senior official at the Elysée palace, who pointed out that the arrangement was based on procedures used by the International Monetary Fund, a key demand of Paris and the ECB.

A eurozone country with liquidity problems would be able to apply for emergency funding from the ESM subject to a tough fiscal adjustment programme -- as with Ireland or Greece -- without having to restructure its debts or agree a standstill.

However, if the country's debt position was judged by the IMF, the ECB and the Commission to be unsustainable, it would have to enter negotiations with its creditors to restructure its debt as a condition of further bail-out funding.

With this new second stage of the mechanism, Germany appears to have gained some of the "automaticity" it was seeking.

During a liquidity crisis, private sector creditors would be encouraged to maintain their exposure to the real economy of a troubled country or to its sovereign debt. But during the second stage, there could be a graduated response, including debt standstills, maturity extensions, interest rate cuts and outright writedowns or haircuts.

French officials insisted that restructuring was a last-resort scenario and that collective action clauses did not make it more likely.

Under the proposal, the new system will be phased in after 2013, meaning it would take six to eight years before the new government bonds, including collective action clauses, amount to a majority of public debt.

The Commission was originally supposed to present the outlines of the mechanism at a meeting of European leaders in December. But the parties decided to accelerate their work in order to give greater clarity to jittery investors. Speculation that they would face harsh treatment in future crises is one factor that unsettled the markets, ultimately forcing Ireland to request a bail-out.

The compromise was produced following urgent negotiations over the weekend between Berlin, Paris and Brussels.

Steffen Seibert, German government spokesman, said the two-page paper was finalised by France and Germany, working "very closely" with Jean-Claude Juncker, the Luxembourg prime minister who chairs the 16 eurozone members in the Eurogroup, as well as Herman Van Rompuy, permanent chairman of the European Council, and with José Manuel Barroso, president of the European Commission.

Berlin and Paris are anxious not to be seen to be laying down the law for the other EU member states but to be working in close collaboration with all the EU institutions.