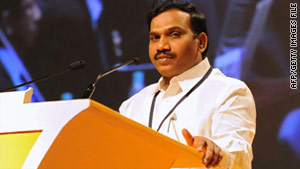 Former telecommunications minister A. Raja was forced to step down.

New Delhi, India (CNN) -- While the whistleblower website WikiLeaks is shaking up the United States and its diplomatic relations with the international community, India has got its own spate of "audio leaks" which has gripped local media and the public.

The controversy has hit top government officials, some of the nation's wealthiest tycoons and the 'Oprah of India.'

Recordings of phone conversations between a lobbyist and prominent journalists, industrialists and politicians leaked in the past few weeks reveal that some of India's most influential journalists served as power brokers for a deal that is considered one of India's biggest scams ever.

The "2G scam," as it is known in India, involves telecommunications minister A. Raja underselling mobile phone licenses in the world's fastest growing mobile phone market.

The tapes suggest Radia was lobbying for the continuation of Raja's post as telecommunications minister after the 2009 elections and both journalists agreed to help.

Indian auditors say this cost the country some $40 billion in lost revenues as the mobile phone licenses were sold at prices set in 2001 under Raja's watch.

Raja was forced to resign last month, but the 2G scam has put parliament in a logjam for the past two weeks as recriminations fly across party lines.

While allegations of corruption are commonplace in India, revelations that some of India's most influential journalists were involved have shocked the public.

Dutt is known as the 'Oprah of India' and Sanghvi is a widely-read columnist.

"It's very, very disappointing. Neither of them is corrupt, nobody is saying they are corrupt. But corruption when it involves ethics is worse then taking money," senior political journalist Tavleen Singh told CNN.

Some 104 tapes have been leaked and are now widely available on the internet.

The transcripts were first published in two Indian magazines, which sourced them to audio recordings submitted recently to the Supreme Court as part of the 2G scam.

While the recordings feature many conversations, the focus has been on Radia's multiple conversations with Dutt and Sanghvi.

In one conversation, Dutt says to Radia, "What do you want me to tell them (Congress Party)? Tell me, I'll talk to them."

In another recording, Sanghvi tells Radia he can offer a fully scripted and rehearsed TV interview for India's wealthiest man Mukesh Ambani.

"When I started out as journalist in Delhi, the government had other ways of controlling the media. It used to be by giving free houses and other freebies like trips with the prime minister. Now they are controlling access. So if journalists cooperate, they are given exclusive access to information, VIP parties and this is most worrying," Singh said.

One of the recordings also features Radia's conversation with the head of India's largest conglomerate, Ratan Tata.

Tata petitioned the Supreme Court on Monday to bar further dissemination of the tapes, contending the leakage has infringed upon his fundamental right to privacy.

"We have somewhat slipped into a morass of series of allegations ... unauthorized tapes flooding ... the media going crazy on alleging, convicting, executing ... literally character assassination ... stop this sort of Banana Republic kind of attack," Tata said in a statement.

While both Dutt and Sanghvi have not denied the authenticity of the recordings, they both maintain they were simply placating a source for news gathering purposes and believe they have done no wrong.

In a Twitter post, Dutt said: "Unless we only cover news based on bland press conferences, we have to talk to all sorts, good and bad, I think there is nothing wrong in stringing along a source for info...I think EVERY journo has the right to engage a source, its NO CRIME...as a matter of record, I never passed the message. But info sharing per se is not immoral in a fluid news situation."

Other senior journalists believe the Indian media is facing a crisis of credibility.

"The feedback I'm getting is nobody trusts us journalists anymore," Singh said.

"Barkha and Vir are very good friends of mine, I still continue to respect them. But I just wish they had said sorry and ended it there. India has 300 television channels, most of them in very rural areas. If this is happening in Delhi just look at the consequences lower down."