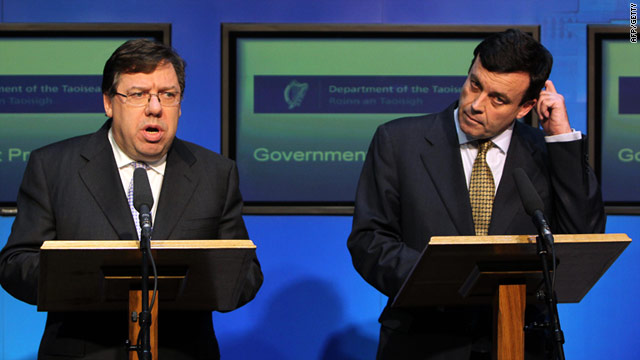 The credit ratings agency cited increased uncertainties over Ireland's economy and public finances for cutting its foreign and local-currency government bond ratings from Aa2 to Baa1.

The action follows similar but less drastic downgrades by Standard & Poor's and Fitch, adding to the pressure as investors demand a higher return to buy government bonds.

Moody's said in a statement that its "negative outlook on... the government of Ireland is based on... the risk that the Irish government's financial strength could decline further if economic growth were to be weaker than currently projected."

Following the move markets pushed up the yield, or rate of return, on Irish benchmark 10-year government bonds to 8.334% from 8.279%.

Ireland had to seek an 85-billion-euro ($113 billion) rescue package from the European Union and International Monetary Fund as massive debt and deficit problems left the country on the verge of collapse.