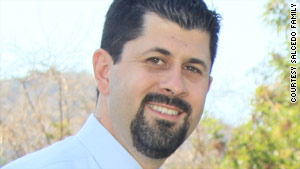 (CNN) -- The bodies of six men -- including a California educator -- were found Thursday in the north-central Mexican state of Durango, hours after they had been abducted from a nearby restaurant, the man's relatives said Friday.

"He was needlessly and senselessly murdered," said Carlos Salcedo, 37, about his brother, Augustin Roberto "Bobby" Salcedo, of El Monte, east of Los Angeles.

Bobby Salcedo, 33, had traveled with his wife to visit her family in Gomez Palacio, his brother said. They were eating in a restaurant Wednesday night when armed men barged in, forced everyone onto the floor and abducted all six men who were in the party, Carlos Salcedo told CNN in a telephone interview.

At 7 a.m. Thursday, police notified his sister-in-law that they had found her husband's body in a local ravine with bullet wounds to the head and chest, he said.

"All indications are that this was just random, a violent act, just a case of being in the wrong place at the wrong time," he told reporters in El Monte.

"What we really want to do is just shed a light on this incident and the senseless, violent acts that are happening across the border from us and really just put a spotlight on this and make sure that we find justice."

"He was a brilliant, a bright star for our community, and he as taken from us," said El Monte Mayor Andre Quintero of Salcedo, who served on the city school district board. "He was stolen from us and now we need to hold them accountable for what they did."

A man who answered the phone at Gomez Palacio's Secretariat of Protection and Roads said no one was available Friday to discuss the matter.

Violence in Mexico has been heightened in recent years by drug-related disputes. The country ended 2009 with a record number of drug-related deaths, exceeding the record tally reached in 2008, unofficial counts indicate.

The government has not released official figures, but national media say 7,600 Mexicans lost their lives in the war on drugs in 2009. Mexican President Felipe Calderon said earlier this year that 6,500 Mexicans died in drug violence in 2008.

The vast majority of the deaths have been among criminals, not civilians, Calderon and other Mexican officials have said repeatedly.

Though the family has received no official word about whether the killing was related to drugs, "We imagine it had something to do with it," Salcedo's sister, Griselda, said in a telephone interview.

The siblings' father was a Mexican laborer in the 1950s who emigrated to the United States with his wife and made home in East Los Angeles. As their family grew, "education was a number one priority," Carlos Salcedo said. "Every single one of us went to university and graduated -- a bachelor's and four master's."

Roberto Salcedo, who was in the middle of his dissertation on educational leadership, took that a step further and was a doctoral candidate at UCLA, served on the El Monte elementary school board and worked as assistant principal at El Monte High School.

Carlos Salcedo served on the high school board.

When the soccer team of a high school where Roberto Salcedo had worked won a regional championship, "he raised money to get them all championship rings" at $500 apiece for 30 players, Carlos Salcedo said.

Among his younger brother's legacy are former students who have gone on to become teachers in the school district, he said. And his focus on education has left an even stronger imprint on at least one former student. "Somebody had posted on his Facebook, 'I'm going to finish my Ph.D. in your honor,' " Salcedo said.