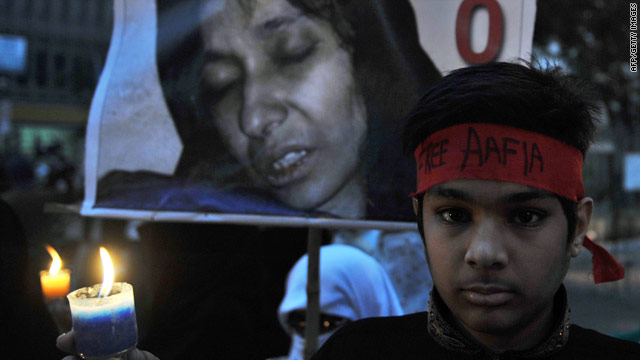 New York (CNN) -- A Pakistani scientist who is accused of shooting at U.S. officers while in custody in Afghanistan was escorted out of a courtroom on the first day of her trial Tuesday, after she shouted that a witness was lying.

Aafia Siddiqui stood up and interrupted U.S. Army Capt. Robert Snyder as Snyder told the jury that documents recovered from Siddiqui's bag in 2008 included notes about mass-casualty attacks, how to make a dirty bomb and names of New York City landmarks such as the Empire State Building, the Brooklyn Bridge and the Statue of Liberty.

"I was never planning a bombing! You're lying!" Siddiqui, who is charged with attempted murder and assault, shouted as she was escorted out of court.

Federal prosecutors say Siddiqui -- who had been sought by the FBI for years for suspected ties to al Qaeda -- shot at two FBI special agents, a U.S. Army warrant officer, an Army captain and military interpreters while she was being held unsecured at an Afghan facility on July 18, 2008.

During opening arguments, Assistant U.S. Attorney Jenna Dabbs said that on the day of the incident, Siddiqui grabbed the M-4 rifle that belonged to one of the U.S. soldiers and attempted to shoot at the group while they were gathered in one room. She allegedly shouted, "I hate Americans" and "Death to America."

"She looked determined, very agitated, and maybe a bit tired," Snyder said of Siddiqui during his testimony Tuesday. He added that he had no doubt she intended to shoot him.

Siddiqui was shot in the abdomen by one of the U.S. soldiers in the room and restrained. She then received medical attention at the U.S. Army's forward operating base just outside the city of Ghazni, Afghanistan.

Siddiqui's defense attorney, Charles Swift, told the jury that there was not sufficient evidence to prove Siddiqui had ever handled the M-4 rifle or fired any shots. Swift says that her fingerprints were not recovered from the gun and that no casings from the M-4 were found in the room.

Before her outburst in court, Siddiqui -- who was wearing a white veil that covered most of her face -- sat next to her team of attorneys, slumped forward on the desk, resting her head on her arms. She occasionally looked up at the jury, the witness and evidence being shown to the court.

She also appeared to be muttering to herself during the prosecution's opening arguments and was once warned by the judge to remain silent.

The trial is being held in U.S. District Court for the Southern District of New York.

Since 2003, the whereabouts of Siddiqui, an American-educated neuroscientist and a suspected member of al Qaeda, had been the source of much speculation. According to Amnesty International, she and her three small children were reported apprehended in Karachi, Pakistan, in March 2003, shortly after the FBI issued an alert requesting information about her location.

Several reports indicated that Siddiqui was in U.S. custody after her arrest in Karachi. But in May 2004, then-Attorney General John Ashcroft and FBI Director Robert Mueller identified Siddiqui as being among several sought-after suspected al Qaeda members.

Officials said Siddiqui was arrested by Afghan police on July 17, 2008, and passed into U.S. custody after the alleged July 18 shooting. She was extradited to the United States in August 2008.