Man with weapons, map of military base arrested 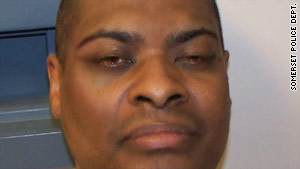 (CNN) -- A man was arrested Monday after police found an arsenal of high-powered weapons and a map of a U.S. military base in his New Jersey hotel, authorities said.

Lloyd R. Woodson, 43, was arrested and faces multiple weapons charges after an investigation into his suspicious behavior at a store in Branchburg, New Jersey, said local prosecutor Wayne J. Forrest.

Woodson, wearing a military jacket, went to a store called Quick Chek on Monday afternoon and was acting suspiciously, Forrest said in a statement. The clerk called authorities.

When officers arrived, Woodson ran into the woods. He was subdued after wrestling with officers, the statement said.

During the struggle, officers noticed that Woodson was wearing a bulletproof vest and carrying an assault rifle in his coat.

Officers searched Woodson's hotel room and found another assault rifle, a grenade launcher, a police scanner, another bulletproof vest, a map of a U.S. military base, hundreds of rounds of ammunition and a Middle Eastern-style headdress, the statement said.