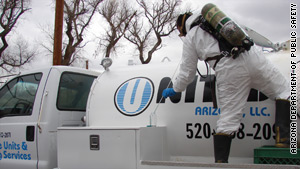 The search of the truck was as awful as it sounds, said a state police spokesman.

And the search of the truck was as awful as it sounds.

"Yeah, that really does suck," Arizona Department of Public Safety spokesman Bart Graves told CNN. "It's a long way to go to make a bust."

Hidden in the holding tank of the truck were 743 pounds of pot, worth about $409,000 on the street, police said in a news release.

An officer pulled over the septic tank truck Wednesday after a check of the license showed it was invalid, police said. The truck was headed northbound on I-19 and stopped about 35 miles south of Tucson, Arizona. Police patrolling the area tend to be more vigilant, Graves said, because the interstate -- which leads directly to Mexico -- is a major thoroughfare for drug and human trafficking.

After the stop, the officer discovered that the commercial vehicle markings on the truck were also invalid. A subsequent search revealed the bales of marijuana in red and orange packages amid the waste.

The bust was not the largest for Arizona police. In 2008, police found more than 2,000 pounds of marijuana in a fake UPS truck, Graves said.

Wednesday's smelly pot was just one major bust this week. On Thursday, police confiscated $681,000 worth of methamphetamine concealed in the false floor of a vehicle.

The driver was stopped for speeding on I-17 near Camp Verde, Arizona, police said. The officer asked to search the vehicle and found 15 pounds of meth, police said.