String of church arsons has east Texas residents on edge 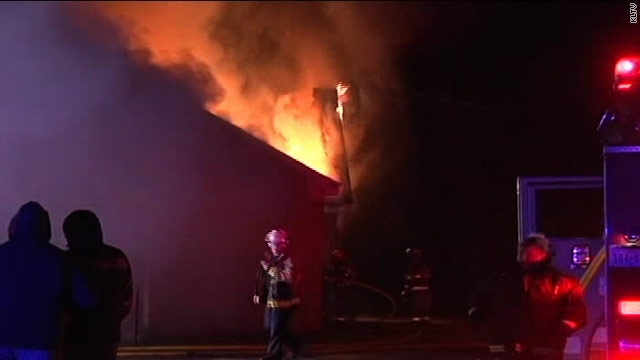 (CNN) -- Rousted out of bed by an early morning phone call, Kay Crosby stood in the rain and watched her church burn.

"We had choir practice Wednesday night, and then Thursday morning, it's gone," she said. "Not even 12 hours later."

Despite the efforts of firefighters from Crosby's town of Wills Point, Texas, and beyond, Russell Memorial United Methodist Church was a total loss.

The blaze was one in a string of 11 fires in east Texas churches this year. Eight have been ruled arson, leaving residents and churches on edge as authorities work to find the person -- or persons -- responsible.

"We certainly can connect several of them," said Tom Crowley, special agent with the Bureau of Alcohol, Tobacco, Firearms and Explosives' Dallas, Texas, office.

Two fires that broke out Monday had not been ruled arson as of Wednesday, but are considered suspicious, he said.

There is no clear theme linking the fires, which have struck various church denominations -- Methodist, Baptist, Church of Christ Scientist -- on different days of the week and at different times of the day, he said. And while the churches are in small towns -- such as Wills Point, which has a population of about 3,800 people -- not all the fires were in remote locations, Crowley said.

Authorities believe one person, or perhaps a group of people, are responsible. Investigators have "people we're looking at" from tips called in, but "nothing specific yet," he said.

"I think maybe I would characterize the mood of our people as perplexed," said Randy Daniels, mayor of Athens, Texas, a town of about 12,000 that has seen three of the church fires. "... I think most people would just wonder who could be doing this or even why. Most people consider it just incomprehensible and unconscionable that somebody could and would be doing this."

The fires have been a blow, he said, especially in east Texas, which has "a faithful, church-going people."

Included in the total of 11 is a January church arson in Temple, Texas, Crowley said. Authorities are not sure if it is related to the others, as Temple is more than 150 miles away from the area east of Dallas where most of the fires have occurred. However, the ATF is in contact with investigators on that fire, he said. In addition, he said, one church fire from January has not been ruled arson.

In Tyler, Texas, Tyland Baptist Church is "displaced, but very much alive," the Rev. David Mahfood wrote on the church Web site.

"We grieve the loss of [our] church home, the place that we loved and shared so many memories with our church family," he wrote. "It was a very special place to all of us, and our emotions at this time are varied and many."

Tyland burned on January 16, Mahfood told CNN Wednesday, so members have had some time to process the event. Still, he said, there is a "real feeling of violation, a real feeling of 'I never thought this would happen to me.'"

Like Russell Memorial, the 120-member church was destroyed. "Not a Bible, not a hymnal" was left, Mahfood said. "We've got some bricks. That's it." Tyland Baptist is currently holding services in another church's sanctuary, he said.

Russell Memorial's congregation, which numbers in the hundreds, is meeting in its nearby fellowship building, Crosby said. The burned building hasn't been released back to the church yet, she said Wednesday, although investigators had released it to insurance adjusters.

"We had a big, beautiful sanctuary," she said. "It's a million-dollar loss." Members are sorrowful, she said, because the church was built by donations -- one person donated the pews, another the cushions, and members donated hymnals, including some in memory of loved ones.

A similar string of church arsons occurred in 2006 in rural communities outside of Birmingham, Alabama. Three college students were arrested and pleaded guilty to federal arson charges. Two were sentenced to eight years in prison, while a third was sentenced to seven years.

Another string of suspicious church fires took place in the 1990s and led to the enactment of the 1996 Church Arson Prevention Act, which provided funding for investigations and assistance to congregations. But authorization for the act has expired, and Rose Johnson Mackey of the National Coalition for Burned Churches says it should be reauthorized.

"If we still had that funding, then some of the people who were victimized in 1996 might not be victimized again in 2010."

In Texas, Federal authorities are working with the Texas Rangers and the state Department of Public Safety, as well as local police, sheriffs' and fire departments, to investigate the blazes, Crowley said. On Monday, officials contacted a number of local authorities in east Texas, warning them about the fires and urging them to remain vigilant. A number of locations have beefed up police patrols near churches, he said.

The churches themselves are "on heightened alert, I guess you would say," said Daniels. Some church members have been staying at their churches, while others are patrolling along with police.

I think most people would just wonder who could be doing this or even why.
--Randy Daniels, mayor of Athens, Texas
RELATED TOPICS

"We're a rural area," he said. "We don't have the cameras and surveillance devices that people have."

Some smaller churches are pooling resources to have overnight security patrols, Mahfood said, while larger churches are patrolling on a volunteer basis. "The community is on edge," he said.

"We're certainly concerned," said Tyler Mayor Barbara Bass. In addition, she pointed out, with the current economic downturn, the burned churches will have to rebuild by using resources that could have been used to help assist others in the community.

However, "it's brought the community together in a lot of ways," she said. Churches in Tyler held a prayer rally on January 24 to show support for the churches struck by arson. Members are watching out for other churches as well as their own, she said.

The ATF is offering a $25,000 reward for information leading to the arrest and conviction of those responsible, Crowley said.

At Russell Memorial, meanwhile, church members are counting their blessings in the face of tragedy.

A large brass cross that hung over the choir loft was found and salvaged, Crosby said. "It was kind of twisted, but we're going to have it restored." Also found was a cross borne by acolytes during services, she said.

Members are grateful the church's offices and records remained intact, she said, as well as the church's set of English handbells.

"We're saddened," she said. "But you know what, that building was not our church. ... We're OK, because we're strong people, and we know that God's hand is on us and he will take care of us."