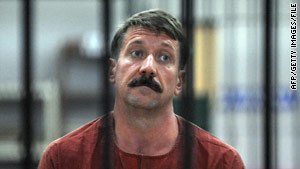 Washington (CNN) -- International arms dealer Viktor Bout has been indicted by federal authorities on a series of new charges, including counts of illegally purchasing U.S. cargo planes to ferry weapons to warring parties and regimes in Africa and the Middle East.

The new indictment, announced in New York and Washington Wednesday, comes as the United States steps up efforts to extradite Bout to New York from Thailand, where he has been jailed since 2008.

The indictment charges Bout, a Russian native, and his alleged American co-conspirator, Richard Chichakli, with the illegal purchase of a Boeing 727 and a Boeing 737 and with money laundering and wire fraud. Chichakli remains at large, authorities said.

The Justice Department said Bout has been an international weapons trafficker since the 1990s, carrying out a massive weapons trafficking business by assembling a fleet of cargo planes to transport weapons to parts of Africa, the Middle East and South America.

"The arms that Bout has sold or brokered have fueled conflicts and supported regimes in Afghanistan, Angola, the Democratic Republic of the Congo, Liberia, Rwanda, Sierra Leone and Sudan," the Justice Department said.

The superseding indictments were returned by a grand jury in the Southern District of New York. The previous indictment of Bout centered on his alleged efforts to send millions of dollars worth of weapons to arm guerrilla fighters in Colombia.

Thai courts to date have balked at extraditing Bout to the United States on the basis of the original charges.

"The United States has apprised Thai authorities of the new charges against Bout ... and will continue to work closely with them on this matter," the Justice Department statement said. "The United States is also coordinating with Interpol to locate and arrest Chichakli."

Tuesday, a Thai court rejected a request by Bout to be released on bond.