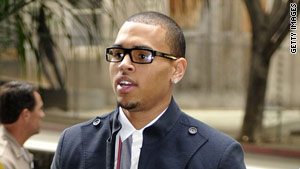 "It looks like you're doing really, really well," Schnegg said.

The police chief in Richmond, Virginia -- where Brown is being allowed to complete his sentence -- reported that he had worked 32 days of hard labor, she said.

Schnegg said when she sentenced Brown that she wanted to see him do "actual physical labor, as opposed to some type of community service."

The report on his court-ordered domestic violence counseling said he had completed 17 out of 52 groups sessions, she said.

The agency running the sessions reported "you are participating and doing a very good job," the judge said.

The judge rewarded Brown by signing an order allowing him to again travel outside the United States for concerts.

When Brown returns to court on May 11, 2010, for his next probation progress report, he will be "way over halfway there" to completing his sentence, she said.

Brown was sentenced in August to serve five years probation and to spend more than 1,400 hours in "labor-oriented service" for the assault conviction.

Schnegg also put a restraining order in place, requiring Brown to stay 50 yards away from Rihanna, 10 yards if the two are at the same industry event. The judge issued a strict warning to Brown not to violate the order, which remains in place until 2014.

Brown was arrested after an early morning argument inside a rented Lamborghini on a Hollywood street on February 8, 2009.

According to Brown's probation report, the February argument began over an incident at a Beverly Hills party. An earlier, sworn statement by Los Angeles Police Detective DeShon Andrews said the incident began when Rihanna found a text message on his cell phone from "a woman who Brown had a previous sexual relationship with."

The pair argued while in the car driven by Brown, the police statement said. It went on to describe the assault in great detail, saying Brown punched Rihanna -- identified in the statement by her real first name, Robyn, and the first initial of her last name, Fenty -- numerous times and put her in a headlock, restricting her breathing and causing her to start to lose consciousness. He threatened to beat her and kill her, according to the statement, and he bit her ear and her fingers.

Brown made a public apology in July in a video statement posted on his personal Web site.

"I have told Rihanna countless times, and I'm telling you today, that I'm truly, truly sorry in that I wasn't able to handle the situation both differently and better," Brown said in the Web site statement.