Teacher describes how he stopped shooting 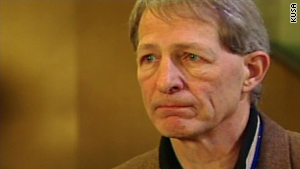 Teacher David Benke says his only regret is that the shooter was able to get off a second shot.

Denver, Colorado (CNN) -- During emergency drills at Deer Creek Middle School, teacher David Benke used to tell his students that if anything ever happened, he wanted to be able to "do something about it."

When he saw a man shooting at students as they were leaving the Littleton, Colorado, school on Tuesday, "What was going through my mind," Benke said, "was that I promised."

Benke tackled the gunman, who had shot and wounded two students, and with the help of another teacher and some bus drivers, was able to hold him until police arrived.

"I noticed that he was working a bolt-action rifle," he said. "I noticed that and realized that I had time to get him before he could chamber another round."

Eastwood, who police said had been a student at the school in the 1990s, was charged with two counts of attempted first-degree murder. He appeared in court via video link from jail Wednesday morning. CNN affiliate KUSA reported a judge ordered him held on $1 million bond.

If he does post bond, the court ordered that he have no contact with anyone under 18 and said he must seek mental health treatment, KUSA reported. It also said that if he posts bond, he cannot possess alcohol, drugs or firearms and must be monitored by GPS.

The affiliate said Eastwood's next court appearance is March 2.

Video: Teacher: 'I just tackled him'

Authorities released no information about a motive in the shooting, saying the case was still under investigation.

Deer Creek is two miles from Columbine High School, site of one of the deadliest school shootings in U.S. history, where 12 students and one teacher were killed in 1999. The two gunmen, both Columbine students, then turned their guns on themselves.

The students wounded Tuesday, a boy and a girl, were taken to Littleton Hospital with non-life-threatening injuries, a sheriff's office spokeswoman said. Principal Rob Hoover said one is doing well and the other was "progressing well" but was still hospitalized.

Both students were eighth-graders, the school district said. KUSA reported one was Reagan Weber, who was treated and released from Littleton Adventist Hospital.

The other, Matthew Thieu, was in serious condition at Children's Hospital. In a written statement, his mother expressed gratitude for the outpouring of support, but asked for privacy as she focuses on his recovery. She said her son was recovering from a fractured rib and a lung injury.

Eastwood's father, War Eagle Eastwood, told KUSA that his son had struggled with mental illness, was behind on bills and couldn't hold a job because of his "not really knowing what he's doing half the time." His son, who heard voices, tried to seek help, he said, but had no money to pay for it.

Bruco Eastwood had been cooperative with investigators, said Jefferson County sheriff's spokeswoman Jacki Kelley. Eastwood had been living with his father for about five years, and was unemployed other than working as "kind of a ranch hand" for his father, she said. He had been attending a community college attempting to get his GED.

School officials could not give many details to reporters Wednesday because of an ongoing police investigation, but Hoover said the suspect had come inside the school earlier and signed in. "We know he did that much, but then we know he left, and that was all we knew at that point."

Assistant Principal Becky Brown told reporters she ran outside after hearing "the pop" and saw Benke tackle the suspect. "When I saw Dr. Benke and the look on his face, I knew that we needed to help," she said. While Benke and the suspect struggled on the ground, she grabbed the gun "and got it out of there," she said.

Benke said the suspect threatened to sue him during the struggle, saying he was using excessive force.

Asked why she ran toward gunshots when others might flee, Brown grew emotional as she said, "Those kids are my kids, and it's important, and my teachers, we're like family."

"You're just doing what you can do to try and protect your kids," Benke said.