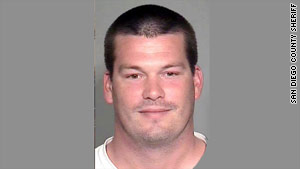 (CNN) -- A registered sex offender was charged Wednesday with rape and murder in connection with the disappearance of a California girl.

John Albert Gardner III, 30, pleaded not guilty to all charges, which stem from last week's disappearance of Chelsea King, 17, of the San Diego, California, area.

The charges against Gardner make him eligible for the death penalty, the San Diego County district attorney's office said Wednesday. The office said it has not yet determined whether it will seek capital punishment.

Gardner, of Lake Elsinore, California, will not be allowed to post bail.

Gardner was also charged Wednesday with assault with intent to commit rape in connection with an attack on a jogger in December 2009.

Searchers found a body Tuesday that they believe to be King's. Police arrested Gardner on Sunday.

Gardner is a registered sex offender, according to Steve Walker, a spokesman for the San Diego County district attorney.

King has been missing since February 25. Investigators say she was last seen at her school in Poway, about 15 miles north of San Diego. Her car, with her cell phone inside, was found at Rancho Bernardo Community Park.

On Tuesday, searchers found remains in a shallow grave at that park; they were found along the shoreline of a tributary south of a lake, authorities said.

"There is strong likelihood that we have found Chelsea," San Diego County Sheriff William Gore said at a news conference Tuesday. He said he expected a positive identification of the body to come Wednesday.

The body was found in a heavily wooded area not visible from nearby homes. A shoe had been found earlier in the same area, the sheriff said.

"Now that we have filed charges, our primary focus is obtaining justice for Chelsea King and her family," San Diego County District Attorney Bonnie M. Dumanis said Wednesday. "I also want to acknowledge the dedication of all the volunteers who helped in the search for Chelsea."

Police said Wednesday that the garage door of the home of Gardner's mother was spray-painted with a message saying that King's blood is on her hands. "Chelseas (sic) blood is on you move out," the message said, according to San Diego police spokesman Gary Hassen.