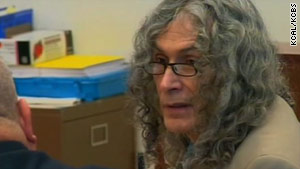 Rodney Alcala, 66, is representing himself in the penalty phase of his trial.

(CNN) -- Before he was a convicted serial killer, Rodney Alcala was a winning bachelor on "The Dating Game."

"Oh yeah, I remember it quite clearly," said Jed Mills, the game-show contestant who sat next to Alcala in 1978. "He was creepy. Definitely creepy."

Found guilty in February of murdering four women and a child, Alcala, 66, is acting as his own attorney in the penalty phase of the trial. He is hoping to persuade the jury in Santa Ana, California, to spare his life.

The crimes Alcala committed date to the late 1970s. Nobody at the time knew the man with the wavy long hair and toothy grin was an apparent psychopath -- an unstable, antisocial personality.

That includes Mills, a veteran television and film actor, whose only encounter with Alcala was when both of them appeared on "The Dating Game."

"That's when I became part of a nightmare, and I didn't realize it was a nightmare until 32 years later," Mills said.

Alcala, who already had been convicted for the 1968 rape of an 8-year-old girl, was the first contestant to be introduced in the game-show episode.

"Bachelor No. 1 is a successful photographer who got his start when his father found him in the dark room at the age of 13, fully developed," host Jim Lange said. "Between takes you might find him skydiving or motor-cycling. Please welcome Rodney Alcala."

After the three bachelors were announced, the young woman who would choose one of them for a date began asking questions. She posed her first one to Alcala.

"What's your best time?" she said.

"The best time is at night," Alcala answered with a wide smile. "Nighttime."

Mills, who was bachelor No. 2, said he had an almost immediate aversion to Alcala. "Something about him, I could not be near him," Mills recalled. "I am kind of bending toward the other guy to get away from him, and I don't know if I did that consciously. But thinking back on that, I probably did."

Alcala was able to charm Cheryl Bradshaw from the other side of the "Dating Game" wall.

"Who will it be?" the host asked her at the end of the show. "I'll take One [bachelor No. 1]," Bradshaw said, and out strolled Alcala.

If Alcala appeared likable to viewers at home, Mills said he was the complete opposite when they sat together in the show's green room, where the show's contestants waited before going on air.

"He was quiet, but at the same time he would interrupt and impose when he felt like it," Mills said. "And he was very obnoxious and creepy -- he became very unlikable and rude and imposing as though he was trying to intimidate. I wound up not only not liking this guy ... not wanting to be near him ... he got creepier and more negative. He was a standout creepy guy in my life."

Within months of his "Dating Game" appearance, Alcala would become a killer, prosecutors said, abducting and murdering a 12-year-old girl in 1979. Before the decade was over, Alcala would claim four more victims, according to testimony at his trial.

"He was aware that he could say things that were considered sexy and funny and the girl would like that," Brown told CNN. "He watched the game and he gave those answers and he won, so he learned some tricks. But a psychopath's true nature comes seeping through.

"When you go back and look, what's most fascinating is that he had already committed a crime," Brown said, "Raped a little girl. Here is a man portraying himself as a desirable young man when he is a violent sexual predator of children."

Alcala's real identity revealed itself off the stage when he was with the other bachelors, Brown believes.

"He is showing his psychopathic personality in the green room," she said. "He wasn't acting at that time. Those were his enemies, and he had to beat them to get the girl and he wanted to win.

"This guy probably literally hated them. This guy was going on the show to prove how special and wonderful he was. And his ego was riding on it."

Though Bradshaw chose Alcala as her date, she refused to go out with him, according to published reports. Being rejected can have a profound impact on serial killers, Brown suggested.

"One wonders what that did in his mind," Brown said. "That is something he would not take too well. They don't understand the rejection. They think that something is wrong with that girl: 'She played me. She played hard to get.' "

Mills said he still has a difficult time discussing Alcala.

"The more time has gone by, the creepier it gets," he said, "because it kind of sinks in slowly. What this guy did, it's hard to express. He kind of haunts me a bit.

"Just talking about it, I get a tightness in my stomach."