Adviser to missionaries in Haiti kidnap case is arrested 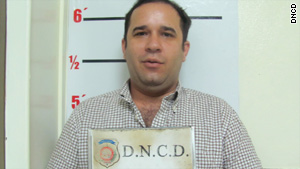 Santo Domingo, Dominican Republic (CNN) -- A man who provided legal advice to 10 American Baptists accused of kidnapping 33 Haitian children after the earthquake there was arrested Thursday night in the Dominican Republic and accused of human trafficking, the country's anti-narcotics agency said Friday.

The man, identified as Jorge Torres-Puello, is linked to a network that trafficked in Haitian and Central American children and is wanted in the United States, El Salvador and Costa Rica, the National Drug Control Agency said.

Torres-Puello had been hiding in the Dominican Republic after he was accused of using the country to take Haitian children to North America, it said.

Members of the drug agency took Torres-Puello, also known as Jorge Torres Orellana, into custody without incident at 8 p.m. in the parking lot of a McDonald's restaurant in the capital, the news release said.

Torres-Puello is a Dominican who was born in New York, it said. "According to documents of authorities in the United States, the Dominican Republic as well as El Salvador and Costa Rica, this person is an important part of a network of traffickers of undocumented people, especially women and children from Central America and the Caribbean," the news release said.

Torres-Puello is also wanted in Vermont on alien smuggling offenses and in Philadelphia, Pennsylvania, for probation violations for fraud, the U.S. Immigration and Customs Enforcement agency said. He is also wanted in Canada.

Shortly after the American missionaries were arrested in Haiti on kidnapping and abduction charges, Torres-Puello contacted their church in Idaho, identified himself as a legal authority on Haitian and Dominican law, obtained a retainer and began representing himself as their attorney/spokesman, the U.S. agency said.

But Torres-Puello is not registered in the country's College of Lawyers, implying that he was practicing without a license, the Dominican drug agency said.

In February, law enforcement authorities in El Salvador suspected that the missionaries' legal adviser looked like a man they were seeking, and asked Interpol to help. The international police agency coordinated the efforts of various agencies that resulted in Thursday's arrest, the ICE statement said.

In a phone interview last month with CNN, Torres-Puello acknowledged he is the same man wanted by Salvadoran authorities but denied the charges against him.

"I never did anything," Torres-Puello said. "I started helping a Dominican pastor helping a lot of people who were stranded to get back to their home countries. We once gave some Nicaraguan and Costa Rican women some money to return home and instead they went to the authorities and put in a complaint against us. I never had anybody against their will."

He also denied Salvadoran allegations that he and his wife ran a brothel out of their home. "I know I am innocent and I want to clear my past," he said.

Journalist Diulka Perez contributed to this story from Santo Domingo.