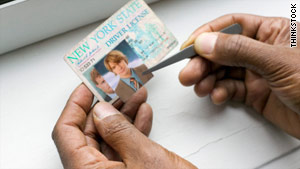 The Justice Department has not developed a coordinated plan to combat ID theft, the report says.
STORY HIGHLIGHTS
RELATED TOPICS

Washington (CNN) -- Ten million Americans a year are victims of identity theft. It's a growing problem in the United States, but fighting it doesn't appear to be a priority, a new report says.

A report by the Justice Department Inspector General released Tuesday cites the wide-ranging costs and dangers of ID theft. Although the report has no new numbers, the financial losses are believed to be substantially higher than the $15.6 billion documented in 2005.

Inspector General Glenn Fine found the effort to combat the problem, however, has lagged since the President's Task Force on ID Theft was established in 2007.

"We found that to some degree identity theft initiatives have faded as priorities," said Fine. He said the Justice Department has not developed a coordinated plan to combat ID theft and that some recommendations of the President's Task Force have not been addressed. No one has been appointed to oversee the efforts, the report says.

The report says "the specific crime of identity theft is not a top FBI priority." However, the report adds that the FBI often addresses the issue through the Cyber Division's criminal intrusion program, which is a priority of the agency.

"Identity theft can also be a significant element of violent crimes, such as domestic abuse, and even terrorism, and a significant number of ID theft-related crimes originate overseas," the report said.