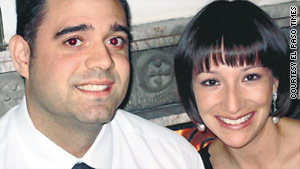 Mexico City, Mexico (CNN) -- An American jailer was the target in the shooting deaths of three people with ties to the U.S. Consulate in Ciudad Juarez, Mexican officials said.

The jailer, Arthur Redelfs, and his wife, Lesley Ann Enriquez, were killed in a drive-by shooting in Juarez earlier this month. Enriquez was an employee of the U.S. Consulate in that city.

Jorge Alberto Salcido Ceniceros, 37, the husband of a Mexican employee of the consulate, was also killed at around the same time as Redelfs and Enriquez.

A suspect arrested in the case gave new details on the high-profile killings, Mexican federal authorities said in a statement late Tuesday. Ricardo Valles de la Rosa, a member of the Aztecas gang, was arrested Friday based on military intelligence, the statement said.

According to federal officials, de la Rosa told interrogators that he was a lookout for the operation that killed the two Americans.

He said he got to know many leaders of the Aztecas, a street gang affiliated with the Juarez cartel, while imprisoned in El Paso County, Texas. Although he was born in Juarez, de la Rosa lived in El Paso for 30 years.

One of the Azteca leaders called and ordered him to find where consulate employees were having a children's party and to follow the white sport utility vehicle belonging to Redelfs, a jail guard in El Paso, authorities said.

The call came days in advance of the killings, the statement said.

De la Rosa followed Redelfs' vehicle down a Juarez avenue, until being told to fall back because the shooters had the vehicle in their sights, the statement said. A few moments later, de la Rosa heard shooting.

According to federal authorities, de la Rosa drove by the scene and saw that in addition to Redelfs, his wife, who was four months pregnant, was also dead. An infant in the back seat was uninjured.

No additional arrests have been made in the case. De la Rosa remains imprisoned pending the outcome of the investigation.

Ceniceros' wife was not traveling with him, but two of their children in the car were wounded. His white SUV looked very similar to the one Redelfs drove.