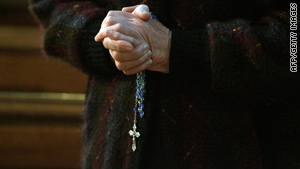 (CNN) -- Vatican officials failed to take action against a priest accused of sexually abusing two teenage girls in Minnesota despite repeated warnings from a local bishop starting in 2005, attorneys for one of the alleged victims said Monday.

The Vatican's failure occurred despite the establishment of safeguards established four years earlier to deal with the growing abuse scandal inside the Catholic Church, they said.

The priest -- Father Joseph Pavanivel Jeyapaul of Ootacamund, India -- served in a diocese in Crookston, Minnesota, for a little more than a year in 2004 and 2005, according to church documents unearthed in a lawsuit related to the case. Complaint letters from Crookston Bishop Victor Balke to Rome were acknowledged by Vatican officials, but no disciplinary action was taken, the documents show.

Jeyapaul is now the head of a church education commission in Ootacamund, giving him continued access to children, lawyers said.

"This is systematic. All roads ... lead to Rome and the top officials there," said Jeff Anderson, a St. Paul, Minnesota, attorney representing the alleged victim.

"As horrific as the rape of children by Jeyapaul is ... the coverup of it is every bit as horrific and criminal."

Father Louis Rag, bishop secretary of the Ootacamund Diocese, confirmed Monday that Jeyapaul is still in Ootacamund. He refused to comment further, except to note that he had heard about the charges against Jeyapaul through media reports.

Anderson revealed the church documents at a news conference in St. Paul. The county attorney's office for Roseau County, Minnesota, is trying to extradite Jeyapaul from India.

The Crookston Diocese first received reports of "inappropriate behavior" on the part of Jeyapaul in September 2005, according to a letter Balke sent four months later to Cardinal William Levada, head of the Vatican's Congregation for the Doctrine of Faith, a body established to deal with cases of alleged abuse.

Pope Benedict XVI headed the congregation before being chosen to lead the Roman Catholic Church.

Balke wrote that according to an internal investigation, Jeyapaul took a teenage girl to his rectory in the summer of 2005, where "he proceeded to kiss her repeatedly, pulling her on top of him and at one point touching her beneath her clothing."

Balke also said in the letter that Jeyapaul had misappropriated "a substantial amount of money belonging to the parish and also attempted to give a diocesan vehicle to a third party as payment for an outstanding debt."

The bishop went on to warn the Vatican that it is "impossible to say that Father Jeyapaul does not at present pose a risk to minors."

"I cannot in good conscience allow this matter to be passed over" simply because Jeyapaul has now returned to India, Balke said. "In my mind, that would be a shameful act of betrayal towards the women and girls in India to whom Fr. Jeyapaul could at present pose a serious risk."

A representative for Levada responded to Balke's letter in May 2006, acknowledging his complaint and writing that the Vatican had requested to church officials in India that "Father Jeyapaul's priestly life be monitored so that he does not constitute a risk to minors and does not create a scandal among the faithful."

Six months later, Balke relayed a new series of allegations about Jeyapaul to Levada. Balke wrote that he had received reports "of similar behavior having taken place between Fr. Jeyapaul and a second girl."

In both instances, Balke wrote, Jeyapaul had been counseling the girls about their religious lives.

Church officials once again acknowledged Balke's letter but took no disciplinary or other action against Jeyapaul, the documents show.

Anderson accused Vatican officials Monday of being more concerned with preserving their own reputations than with protecting children.

"They have a problem. ... They fail to do what is necessary to protect children across the globe."

CNN's Alan Silverleib and Sumnima Udas contributed to this report.