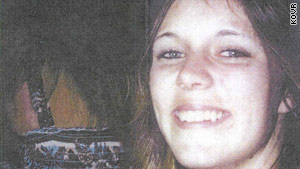 (CNN) -- The remains of a woman who disappeared 22 years ago in northern California have been found after the son of the woman's purported killer guided police to the site where her body was dumped, investigators announced Thursday.

The alleged killer's son told authorities that he watched his father kill 27-year-old Lysandra Marie Turpin in 1988 and that his dad forced him to help dispose of the body, the Humboldt County, California, Sheriff's Office announced.

Ernest Samuel Christie III, who was 16 at the time, told authorities that his now-dead father, Ernest Samuel Christie Jr., made him help dump Turpin's body in a ditch near their home in Fieldbrook, California, about 80 miles south of the Oregon border. Christie said his father forced him to help cover the body with tires, douse it in gasoline and set it on fire, Humboldt County Sheriff Gary Philp said in a statement Thursday.

Christie's dad had held and abused Turpin at his house for several weeks before killing her, Christie told the sheriff's office. She had been reported missing to Humboldt County law enforcement on April 8, 1988.

After Christie supplied the sheriff's office with a map of where the body had been dumped, a team of detectives, evidence technicians, and sheriff's deputies found teeth, clothing and charred bones. A forensic odontologist positively identified the remains as Lysandra Turpin on Wednesday, according to Philp.

Christie told authorities that his father had abused other women, once holding a woman prisoner in a hollowed-out redwood tree stump. The woman escaped and declined to report the incident to law enforcement, the sheriff's office said.

Using a description provided by Christie, sheriff's personnel located the stump and found a carpet, plastic jugs, a hypodermic syringe and clothing there, Philp said Thursday.

Christie told authorities that his dad once took a woman on his fishing boat, tied her up and told her he was going to kill her. The woman managed to escape, and detectives were recently able to find her and corroborate Christie's account, Philp said.