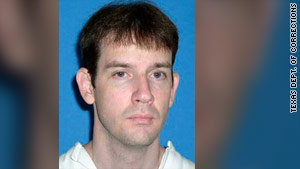 Washington (CNN) -- The Supreme Court on Monday rejected separate appeals from two Texas death row inmates, one involving an admission of an illicit affair between the prosecutor and the trial judge.

The justices without comment turned aside Charles Hood's challenge of his conviction. A state appeals court earlier this year ordered a new trial on the sentencing phase.

Hood was convicted of the 1989 murder of Tracie Lynn Wallace and her boyfriend Ronald Williamson in their home outside Plano, Texas, which is just north of Dallas.

The former nightclub bouncer has denied the charges. He was arrested while driving the victim's car and his fingerprints were found at the murder scene.

It was only after the trial that Hood's lawyers learned of the romantic relationship between then-Judge Verla Sue Holland and one-time district attorney Tom O'Connell.

Various state courts have rejected the assertion the affair cost Hood a fair trial. His lawyers Monday vowed to continue the fight to prove his innocence.

"We are disheartened that the United States Supreme Court ruled not to hear the case of Charles Hood in which the trial judge and district attorney who prosecuted Hood engaged in a secret, long-term, extramarital affair," said Andrea Keilen, director of the Texas Defender Service, a legal group representing Hood. "This is particularly disappointing given that the Texas Court of Criminal Appeals to date has ignored this obvious and outrageous constitutional violation."

After her stint as a trial judge, Holland joined the state's highest criminal appeals court before resigning in 2001. That is the same court that ruled in February that Hood deserved a new trial on his punishment. The judges did not mention the affair in that decision.

But the state high court last year refused Hood a new trial based on the admission of the affair. Neither the judge nor prosecutor were sanctioned for their behavior by the Texas Commission on Judicial Conduct or by the state bar. The case is Hood v. Texas (09-8610).

In the separate appeal, the high court refused to intervene on behalf of one of the nation's longest serving death row inmates. Delma Banks was convicted of the murder 30-years ago this week of 16-year-old Richard Whitehead in eastern Texas. Banks' original 2003 execution date was postponed over allegations of prosecutorial misconduct at his trial. Various courts have since allowed the execution to go forward.

Banks' attorneys claim faulty eyewitness testimony and the exclusion of blacks on the all-white jury prevented him from receiving a fair trial. Banks is African-American, his victim was white. The case is Banks v. Thaler (09-717).

The justices also put off a decision on another high-profile capital case from Texas, which executes more prisoners per year than any other state.

Henry "Hank" Skinner has made an actual innocence claim, demanding DNA testing on other evidence gathered at the crime scene. The justices had issued a stay just before his scheduled March 24 execution, to consider whether capital inmates have a basic right to have forensic evidence reviewed.

Skinner, 47, was convicted of the the New Year's Eve 1993 killings of his live-in girlfriend and her two sons. He strongly denies any involvement.

Texas Gov. Rick Perry has received more than 8,000 letters from Skinner's advocates urging a new trial, according to the Innocence Project and Change.org, whose members and supporters have sent the letters through their Web sites.

The Supreme Court had scheduled the appeal for decision Monday. The justices are now expected to again take up the Skinner case later this week, and would decide whether to hear oral arguments on the larger constitutional questions presented. They have no deadline on deciding the matter. The case is Skinner v. Switzer (09-9000).