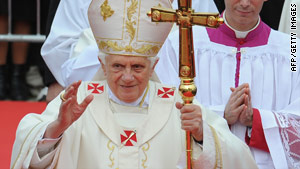 Pope Benedict XVI is named in a suit filed by an Illinois man alleging that the Vatican covered up sexual abuse by a priest.
STORY HIGHLIGHTS
RELATED TOPICS

(CNN) -- An Illinois man is suing the Vatican and Pope Benedict XVI for allegedly covering up sexual abuse by a priest at a Catholic school in Wisconsin.

The lawsuit demands the Vatican release the names of thousands of Catholic priests that the suit says have "credible allegations of sexual misconduct" against them.

The alleged victim, who is now an adult, says he was molested by Father Lawrence Murphy while a student at St. John's School for the Deaf, according to the complaint filed in U.S. District Court in Milwaukee, Wisconsin.

Federico Lombardi, a Vatican spokesman, declined to comment on the case.

Pope Benedict XVI was named as a defendant because he has the ultimate authority to remove priests and because of his involvement in reviewing sex abuse cases when he was Cardinal Joseph Ratzinger, the suit says.

"There are a number of priests, brothers, and agents who defendant continued in ministry after defendant knew or suspected that those agents had molested children," the suit says.

Peter Isely, a director with the Survivors Network of those Abused by Priests (SNAP), estimated the Vatican is investigating 4,000 cases of sex abuse by church employees.

He made his comments in sign language and his daughter, Gigi, interpreted his words.

The now-deceased Murphy is believed to have molested up to 200 boys, Isely said