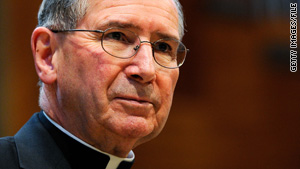 (CNN) -- A Mexican resident who says he was sexually abused by a priest as a child is suing the Roman Catholic Cardinal of Los Angeles and Mexico's top-ranking Catholic cleric, alleging they aided and abetted the abuse by moving the priest between dioceses as allegations piled up against him.

The suit does not name the alleged victim, identifying him only as a Mexican citizen. It alleges that Los Angeles Cardinal Roger Mahony and Mexico City Cardinal Norberto Rivera knew the priest -- identified in the suit as Nicholas Aguilar Rivera -- was abusive but authorized him to move back and forth between Mexico and the U.S. and to continue serving in parishes.

The priest, a Mexican, faces dozens of accusations of sex abuse and was defrocked by the Vatican last year, according to various media reports and to the law firm that filed the suit. The church has not commented on Aguilar's status, but it has not countered reports that he was defrocked.

The suit, filed Tuesday in Los Angeles' federal court, says that the anonymous plaintiff was sexually abused by Aguilar when he was about 13 years old.

The suit alleges that Rivera -- then bishop of Tehuacan, Mexico -- transferred Aguilar to the Los Angeles Archdiocese in 1987 after Rivera suspected him of abuse. The lawsuit contends that Rivera sent Mahony a letter documenting what he called Aguilar's "homosexual problems."

The suit alleges that the Los Angeles Archdiocese learned of abuse allegations against Aguilar in one local parish, then transferred him to another parish, where additional allegations soon surfaced.

When the archdiocese confronted Aguilar about the allegations in early 1988, the priest said he planned to return to Mexico, the lawsuit says, and the archdiocese declined to alert the authorities. "These actions aided, assisted and facilitated Fr. Aguilar's ability to flee the United States of America," the suit alleges.

According to the suit, Mahony wrote to Rivera -- still bishop of Tehuacan -- in March 1988 when the priest was back in Mexico to say that "It is almost impossible to determine precisely the number of young altar boys that (Aguilar) has sexually molested, but the number is large... This priest must be arrested and returned to Los Angeles to suffer the consequences of his immoral actions."

Rivera's reply letter, according to the suit, said that, "You will understand that I'm not in a position to find him, much less force him to return and appear in court."

In April 1988, the Los Angeles Police Department charged Aguilar with 19 felony counts of sexual abuse against children, but Mexico has declined to extradite or prosecute him, according to Mike Finnegan, one of the lawyers for the unnamed plaintiff.

A spokesman for the Los Angeles Archdiocese called the lawsuit's claims "preposterous and without foundation."

"None of the documents concerning Nicholas Aguilar-Rivera are new," said the spokesman, Tod M. Tamberg, in a statement Wednesday. "They show that Cardinal Mahony urged Aguilar-Rivera's return to the U.S. to face justice."

Aguilar has been convicted of abuse by a Mexican court but has never served prison time, according to the plaintiff's law firm, Jeff Anderson & Associates, based in St. Paul, Minnesota.

Rivera was named archbishop of Mexico City, Mexico's top-ranking Catholic post, in 1995 and has since been named cardinal. The suit says that Aguilar occasionally served under Rivera in Mexico City.

The Minnesota law firm has represented previous Mexican victims of sex abuse against the Archdiocese of Los Angeles in which the church wound up settling out of court. But this is the first in which the firm is also trying to sue the Catholic Church in Mexico.

The plaintiff's lawyers are relying on an obscure federal law that they say grants U.S. courts jurisdiction in foreign civil cases that violate treaties to which the United States is party.