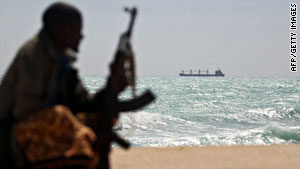 The EU, NATO and other agencies play a key role in bringing suspects to justice, says the U.N.
STORY HIGHLIGHTS

United Nations (CNN) -- The U.N. Security Council wants to make it easier to prosecute pirates, suggesting in a new resolution the possibility of international tribunals to try pirates.

In a resolution unanimously adopted Tuesday, the 15-member body called for tougher legislation by countries to prosecute and jail suspects caught off the coast of Somalia, according to the United Nations website.

The resolution also appealed to all countries "to criminalize piracy under their domestic law and favorably consider the prosecution of suspected, and imprisonment of convicted, pirates apprehended off the coast of Somalia, consistent with applicable international human rights law."

The resolution cited efforts by the U.N Office on Drugs and Crime and other international organizations "to enhance the capacity of the judicial and the corrections systems in Somalia, Kenya, Seychelles and other States in the region."

The resolution also emphasized the role of the European Union, NATO and other agencies in bringing suspects to justice, "in cooperation with Somalia's Transitional Federal Government (TFG)," according to the U.N. website.

"Ongoing violence between the TFG (Somalia's Transitional Federal Government), heavily backed by the African Union Mission in Somalia and other supporters, and rebel groups in Somalia's capital of Mogadishu prevents piracy suspects from being tried or imprisoned there.

Some of the burden has shifted to neighboring Kenya's justice system," the website said.