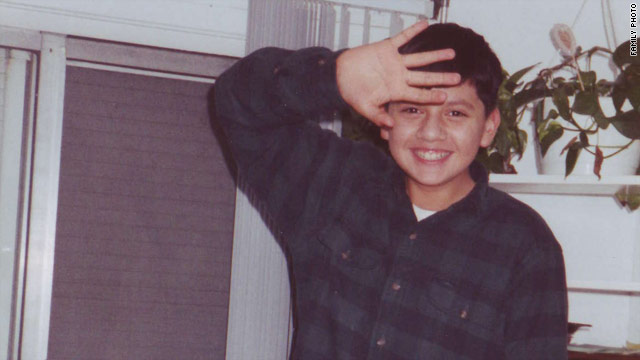 Long Island, New York (CNN) -- It's 4:30 in the morning, with a foot and a half of snow frozen to the ground outside.

On any other day I would reset my alarm and go back to sleep.

But today is the culmination of more than 6 months of investigative reporting on three continents. We were closing in on a key piece of the puzzle to explain what made an all-American kid from New York join al Qaeda.

If our documentary was going to shed light on a dangerous and growing threat to the United States, we had to make this day count.

Nothing was going to keep me in bed.

I'd flown into New York from London the day before, calculating this one interview would reveal what made a mild-mannered young man from Long Island named Bryant Neal Vinas turn to radical Islamic terrorism.

For once jet lag was on my side. The body clocks of my colleagues -- CNN producer Ken Shiffman and CNN terrorism analyst Paul Cruickshank -- were on a different schedule, but they were as keen as me to close the deal.

We rolled out of the hotel forecourt onto the deserted highway. The GPS was directing us down Route 112.

Our job this freezing February morning: talk to the man who'd been dodging us for months.

It wasn't going to be easy.

For months, his family had told us he was out of the country; our counterterrorism sources were saying the opposite.

We parked close to his house in an anonymous New York suburb -- and waited for a chance to talk to him. Sitting hour after hour, it is cramped and cold. Slowly the sun inches above the horizon, and the uppermost branches of the slender trees surrounding the house are soaked in its early golden glow.

The rays were still hours from reaching us but it was a warming sight nonetheless. An omen, perhaps, that our wait would be worthwhile.

Our journey had begun months earlier when Bryant Neal Vinas' arrest was first made public. He'd been in detention almost a year when the news broke, but we quickly got the inside track. A lawyer we'd interviewed in Belgium handed us a document.

In it, Vinas' own account of his time with al Qaeda. His story was intersecting with others we reported. Paul saw it first and Ken brought the team together.

We realized that for the first time we had an opportunity to tell one man's story in fine detail, to paint a detailed portrait that would go far beyond superficial headlines and reveal through one man's story why homegrown radicalization is growing.

There is no shortage of armchair experts, but we wanted the best: people directly involved in Bryant's case. People who know far more than they can say.

Our job would be to squeeze every last detail out of them without jeopardizing national security.

The 'Forrest Gump' of jihad

Waiting in a sumptuous Washington, D.C., office for Janet Napolitano was nerve-wracking.

You get a tight time a slot and that's all you get: a tiny window to ask the right questions.

There is no going back if you forget to ask some important detail. The Homeland Security secretary told me Bryant was the perfect case study of this rising phenomenon.

It's what I was to hear at the FBI just around the corner a few weeks later and at the NYPD's counterterrorism headquarters. No, not the place that's well-known and quite public -- another one hidden away where you'd least expect.

From all the officials we talked to we heard shades of the same story: Bryant was an unremarkable kid who defied logic and upbringing to threaten his nation.

His path to radicalism we were told made him a poster child for the process, "the Forrest Gump of Jihad," as one official put it.

But if the officials had been hard to persuade to talk on camera, his friends and family were tougher. The guy who first got him into Islam met with us several times, talked on several occasions on the phone but just flat out refused to go on camera without payment.

We lost sleep over that. He was eloquent and gave a good account of Vinas' inner struggles, but he figured if he showed himself on TV he'd get trouble at work and therefore needed compensation upfront.

He would have been good. In the end, there were other ways to tell his part of Vinas' tale. Paying for such a critical part of the story was the wrong move, whatever his reasoning.

As we sat waiting on that icy morning, we realized that if this didn't work out we'd need to come up with other options -- and fast.

Time to get our story on air was running out.

The cold reality was this hold-out on Vinas' past was flat out avoiding us, and we still didn't know why.

Counterterrorism officials told us he was the man who introduced Vinas to the radical Islamists who would re-shape his worldview, and help convince him America was at war with Islam.

And he may even have known of Vinas' plot to go to Afghanistan to kill American troops. Imagine the insights he has.

Suddenly as we sit there I see his father come to the street. We've met before so I ask him if I can talk to his son. He tells me he is not there. We drive around the corner and wait.

And then it happens: Our patience is rewarded, our intelligence sources are right. Father and son leave the house in the car together.

They see us and speed off down the snowy back roads. We come back later: this time his father levels with me, tells me he was lying to protect his son because his son refuses to meet me.

I'm frustrated, to put it mildly, but at the same time I feel some sympathy. What I hear is a father telling me he can't control his son. He can't tell him he must talk to me, can't talk him out of his radical and angry views.

Right there, outside that house I feel a chill, but it's not the cold. It's the realization that if want to tell Vinas' full story we will have to find another source.

On that same street corner, our fortunes change. I make a phone call to Pakistan and reach a man in the teeming city of Lahore; a man the FBI is apparently looking for.

According to our intelligence sources, this man had once been friends with both Vinas and the young radical who was avoiding us.

A stroke of luck had landed his phone number. It takes patience and persistence, but eventually he agrees to an on-camera interview.

We are finally getting the inside story of Vinas' radicalization, of his one-man jihadist mission, his travel to Pakistan and up into the border area with Afghanistan.

And most importantly: why he'd exchanged the comfort and security of life in America for the status of an outlaw and the possibility of a violent death.

Just a few months later, Faisal Shahzad -- an American citizen born in Pakistan -- would be named as the suspect in a plot to detonate a fiery car bomb in Times Square, apparently in the name of Islam.

The parallels between Shahzad and Bryant Neal Vinas are stunning: a middle-class upbringing, capable intellect and the apparent collapse of a stable family life and a search for something new.

As I pursue the Shahzad story in Karachi today, I feel like I am walking down a familiar path.

It is a long way from that cold, dark February morning in New York -- but I feel the same sense of fascination as I dig to find out more about Faisal Shahzad and about the surge in conspiracies that threaten the American homeland.

I have a feeling that investigating Bryant Neal Vinas has already provided at least part of the answer.

An interactive timeline of Bryant Vinas' life, from altar boy to al Qaeda member.
Making of an American Al Qaeda

An analysis into why some terror suspects cast off a life of comfort and drift toward extreme views before embracing political violence inspired by a sense of grievance or alienation.
Plots on U.S. soil

An interactive look at recent terror plots on U.S. soil