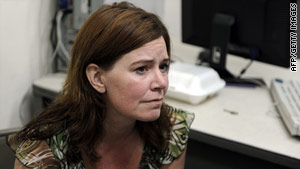 Laura Silsby was jailed January 29, along with nine other U.S. missionaries who were later released.
STORY HIGHLIGHTS
RELATED TOPICS

(CNN) -- Laura Silsby, the American missionary accused of trying to take nearly three dozen children out of Haiti after the devastating January 12 earthquake, has been freed from jail by a Haitian court, her defense attorney said Monday.

Silsby is at the Port-au-Prince airport preparing to board an American Airlines flight to the United States, scheduled to depart at 5 p.m. (6 p.m. ET), said her lawyer, Chiller Roy.

Roy declined to comment on reports that Silsby had been convicted and freed on time served. A Haitian prosecutor was seeking a six-month prison sentence in the case.

Silsby was charged with trying to arrange "irregular travel" for 33 children she planned to take to an orphanage she was building in the Dominican Republic.

She was jailed January 29, along with nine other American missionaries who were later released.

They were stopped while trying to take the children out of the country; authorities said the group didn't have proper legal documentation.

Silsby originally said the children were orphaned or abandoned, but the Haitian government and the orphans' charity SOS Children say that all have at least one living parent. Some said they placed their children in Silsby's care because that was the only way they knew to ensure a better quality of life for them.