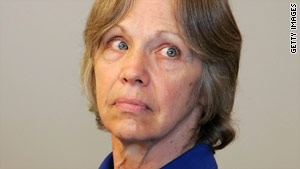 Wanda Barzee pleaded guilty earlier to federal charges of kidnapping and unlawful transportation of a minor.

(CNN) -- A woman who admitted her role in kidnapping Utah teen Elizabeth Smart in 2002 was sentenced Friday to 15 years in federal prison.

Wanda Eileen Barzee, 64, apologized to the Smart family during the 30-minute sentencing in U.S. District Court in Salt Lake City.

"I know the gravity of my crimes and how severe they have been, and I'm just so sorry, again, for all the pain and suffering I have caused upon the Smart family," Barzee said, according to court transcripts.

As part of a plea deal between the defense and federal prosecutors, Judge Dale Kimball gave Barzee credit for seven years that she already has served, the U.S. attorney in Utah said.

After her release, at about age 70, Barzee will be on supervised release for 60 months, federal prosecutors said.

Barzee pleaded guilty in November to federal charges of kidnapping and unlawful transportation of a minor in Smart's kidnapping. In exchange for her guilty plea, she agreed to cooperate in the state and federal cases against her husband, Brian David Mitchell, federal prosecutors said.

"The United States believes that a 15-year sentence reflects the seriousness of this offense, promotes respect for the law and provides just punishment, especially considering the defendant's past cooperation and continued willingness to cooperate in this case in the future," U.S. Attorney Carlie Christensen said.

"Wanda Barzee, what you did to our family and to our girl Elizabeth was wrong. It was wrong, and it was evil. You hurt our family in ways that you will never know. We had sleepless nights. We had endless days," she said.

But the family has not let bitterness overtake them, she said.

"Elizabeth is doing beautiful. She's brilliant. She's bright. She is thriving, but not because you helped her in any way at all," Lois Smart said. "I hope that you will be able to make peace with your maker."

Outside the courthouse, Smart's father, Ed, expressed mixed emotions over the sentence.

"It is what it is. I'm grateful that she is going to be deemed a sex offender, she's going to have to register," he told CNN affiliate KUTV.

Wanda Barzee, what you did to our family and to our girl Elizabeth was wrong. It was wrong, and it was evil.
--Lois Smart, Elizabeth Smart's mother
RELATED TOPICS

When pressed by a reporter as to whether the sentence was appropriate, Ed Smart sighed heavily.

"I think that Elizabeth felt that it wasn't strong enough, but to have it come to an end, it's been so many years," he told KUTV.

Barzee and Mitchell were accused of abducting Smart, then 14, at knifepoint from her bedroom in June 2002. She was found nine months later, walking down a street in the Salt Lake City suburb of Sandy with Barzee and Mitchell, a drifter and self-described prophet who calls himself Emmanuel. He had done some handyman work at the Smarts' home.

The month after they kidnapped Smart, Barzee and Mitchell attempted to break into the home of Smart's cousin but were unsuccessful, prosecutors alleged. In state court in February, Barzee pleaded guilty but mentally ill to one count of conspiracy to commit aggravated kidnapping in the attempted kidnapping of Smart's cousin. In exchange for her plea, prosecutors dropped state charges against her in Smart's abduction, Volmer said.

"Mr. Mitchell's attempt was thwarted when the minor child awakened, which caused Mr. Mitchell to flee," the court documents said.

After her arrest in 2003, Barzee told authorities that she and Mitchell went to the home to abduct the girl and planned to hold her, along with Smart, in the couple's camp in the mountains, according to court documents.

In a separate hearing in state court Friday afternoon, Barzee was sentenced to one to 15 years to be served concurrently with her federal sentence. Under Utah law, the state parole board decides how much time a defendant actually serves, Utah state courts spokeswoman Nancy Volmer said.

Barzee had been housed at the Utah State Hospital while courts determined her competency as well as Mitchell's. After years of being declared incompetent, she recently was declared competent to stand trial, according to the Salt Lake Tribune newspaper. A state court had ruled that she could be forcibly medicated, and that ruling led federal prosecutors to proceed with bringing a case against the couple, the Tribune said.

At a competency hearing for Mitchell in October, Smart, now 21, testified that she had been held captive in Utah and California. Just after her abduction, Mitchell took her to a wooded area behind her home and performed a mock marriage ceremony with her, she said. During the nine months of her captivity, Smart testified, no 24-hour period passed without her being raped by Mitchell.

In March, Kimball ruled Mitchell competent to stand trial. His federal trial is set to begin November 1. State court proceedings against him were put on hold pending the outcome of the federal case.