Man sentenced to 25 years in stabbing death of immigrant 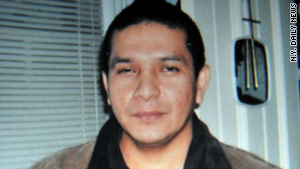 Marcelo Lucero was stabbed to death in Long Island, New York, in November 2008.

New York (CNN) -- A Long Island, New York, man was sentenced to 25 years in prison -- the maximum -- Wednesday for his role in the stabbing death of an immigrant from Ecuador.

Jeffrey Conroy was convicted in April of manslaughter as a hate crime in the death of Marcelo Lucero, an immigrant from Ecuador.

Upon hearing the sentence, Conroy's father, Robert, cursed and yelled, saying "He was 17, for Christ's sake!" The elder Conroy was escorted out of the courtroom by guards and held in a private room until he regained control. He would not speak to reporters.

Conroy was accused of having a hand in the death of Lucero, 37, who was fatally stabbed in the chest on November 8, 2008, in Patchogue, New York.

Conroy was also found guilty of gang assault and conspiracy as well as of assaulting three other Latino men on Long Island.

He was found not guilty of murder as a hate crime, the most serious charge he faced.

Prosecutors say Conroy and six friends in 2008 targeted Latinos for assaults -- part of a sport they called "beaner-hopping."

Several of the seven defendants pleaded guilty to various charges.

At the time of their arrest, six of the seven, including Conroy, were 17. The seventh was 16.