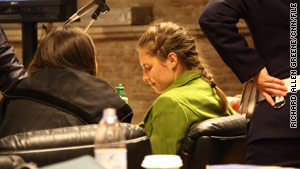 (CNN) -- American Amanda Knox, serving time in an Italian prison for the 2007 murder of her British roommate, appeared in court briefly Tuesday to face slander charges for saying that Italian police beat her during an interrogation, said her attorney, Luciano Ghirga.

Police in Perugia, Italy, have always denied beating Knox and filed the slander charges against her.

Knox, 22, of Seattle, Washington, was convicted in December of killing her British roommate, Meredith Kercher, in November 2007. Also convicted was Knox's ex-boyfriend, Italian Raffaele Sollecito. Knox was sentenced to 26 years and Sollecito to 25.

A third person, Rudy Guede, was tried separately and initially was sentenced to 30 years, but an appeals court later reduced that to 16 years.

Knox appeared briefly at a preliminary hearing on the slander charges. During her trial, she testified that Italian police gave her "cuffs," or small beatings, while interrogating her regarding Kercher's death. She said police used the threat of physical violence to intimidate and pressure her, which led her to falsely accuse Patrick Lumumba in Kercher's murder.

Lumumba was arrested as a result, but he was released shortly afterward once his alibi checked out. He sued Knox for defamation and won.

Knox's attorneys have challenged the judge in the slander case, since he was the same judge that ruled Knox and Sollecito would remain in custody pending trial in November 2007, Ghirga said Tuesday. An appeals court in Perugia is expected to decide on the recusal request June 17. The next court hearing in the slander case is set for October 1.