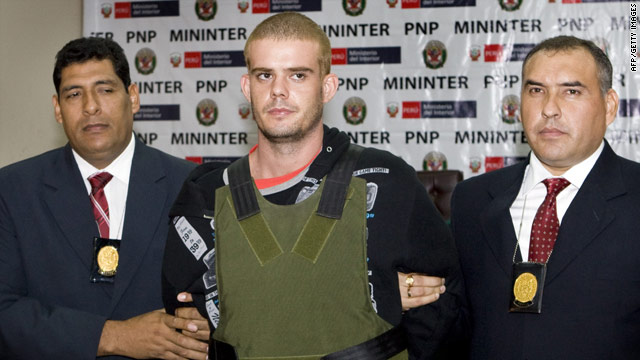 Lima, Peru (CNN) -- -- A judge has extended the investigation into murder suspect Joran van der Sloot, accused of killing a Peruvian woman, for another week, a spokeswoman for Peru's Interior Ministry said Sunday.

Van der Sloot, a Dutch citizen, will remain jailed at the investigations building of Peru's national police where he spent the night, Rut Cardenas said.

Cardenas said a judge has given investigators another week to gather information about the killing of the woman last week.

Carlos Neyra, an official with the Peruvian National Police criminal investigation division, said van der Sloot, the sole suspect named in the case, has not been formally charged.

Neyra added that van der Sloot now has a lawyer. The Netherlands Embassy says it is working with local authorities in the case, but it is not paying for a defense attorney.

The Embassy has told Peruvian authorities that it is not comfortable with the way van der Sloot has been presented to the media, Neyra said. The Peruvian interior minister is asking authorities not to talk about the case without his authorization.

Van der Sloot arrived Saturday at the Lima police headquarters. Handcuffed and wearing a protective vest, he was escorted through a news conference held by Peruvian authorities as photographers snapped photo after photo.

The body of 21-year-old Stephany Flores Ramirez was found Wednesday in a Lima hotel room registered to van der Sloot, who was twice arrested and released in connection with the 2005 disappearance of American teenager Natalee Holloway in Aruba.

A hotel worker is also seen in the video speaking to van der Sloot as he is leaving the hotel, Peru Interior Ministry spokesman Carlos Gonzalo said. When investigators questioned the worker, he told them that van der Sloot told him "don't bother my girl," according to Gonzalo.

Van der Sloot indicated to the hotel worker that he would be returning to the room, Gonzalo said.

Surveillance video from a casino -- also recorded on May 30 -- shows Flores and van der Sloot playing cards at the same table, he said. The woman won about 5,000 soles (about $1,755), though it was not found in the room or the victim's car, Gonzalo said.

Flores' body was badly beaten and investigators believe a tennis racquet in the room was used in the killing, Gonzalo said.

He said "they found bloodied clothes with" van der Sloot and that investigators are testing them, as well as the tennis racquet, for DNA.

The hotel workers became suspicious after no one else left the room, and eventually a foul smell came from it, Gonzalo said. It wasn't immediately clear how much time lapsed between the conversation on video and workers noticing the smell.

Chilean authorities delivered van der Sloot to their Peruvian counterparts on Friday in the border town of Santa Rosa, where he was greeted by hecklers and dozens of media personnel jostling for position to get a better picture of him.

Paperwork showed that van der Sloot entered Chile the same day Flores' body was found, Chilean police told CNN. He was captured in Chile on Thursday and transported to the border to be expelled, said Macarena Lopez, a spokeswoman for Interpol.

Holloway was on a high school graduation trip to the Caribbean island of Aruba, where van der Sloot lived with his family, in 2005 when she disappeared. Van der Sloot was arrested twice in connection with the case but released both times. He denied any involvement and has not been charged.

Van der Sloot also faces an arrest warrant on charges of extortion and wire fraud in Alabama, U.S. Attorney Joyce Vance said Thursday. The charges are unrelated to the killing of the Peruvian woman and deal with an attempt to sell details about Holloway for $250,000, Vance said.

CNN's Mayra Cuevas and Rafael Romo contributed to this report.