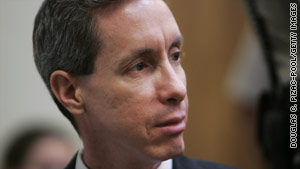 Warren Jeffs still must face a felony charge of sexual assault of a child in Texas.
STORY HIGHLIGHTS
RELATED TOPICS

(CNN) -- A judge dismissed charges against polygamist leader Warren Jeffs on Wednesday after the Mohave County, Arizona, prosecutor requested they be thrown out, citing "much more serious charges" against Jeffs in Texas and the desire of his alleged victims that he "face these more serious charges as soon as possible."

Jeffs, the leader and "prophet" of the Fundamentalist Church of Jesus Christ of Latter-day Saints, had been awaiting trial in Arizona on four charges of being an accomplice to sexual conduct with a minor.

He was indicted in Texas in 2008 on a felony charge of sexual assault of a child. The indictment accuses Jeffs of assaulting a child "younger than 17 years of age and not legally married to the defendant" in January 2005.

The FLDS first became known to many when Jeffs was arrested during a routine traffic stop in August 2006. At the time, Jeffs was on the FBI's Ten Most Wanted list.

The FLDS is a 10,000-member offshoot of the mainstream Mormon church. Its members openly practice polygamy at the Yearning for Zion Ranch in Eldorado, Texas, and in two towns straddling the Utah-Arizona state line: Hildale, Utah, and Colorado City, Arizona. Critics of the sect say young girls are forced into "spiritual" marriages with older men and are sexually abused. Sect members have denied that any sexual abuse takes place.

Before being moved to Arizona, Jeffs was convicted in Utah in 2007 on two counts of being an accomplice to rape. He was accused of using his religious influence over his followers to coerce a 14-year-old girl into marrying her 19-year-old cousin. He was sentenced to two consecutive prison terms of five years to life.

If convicted on the Texas charges, Jeffs could face a maximum penalty of five to 99 years or life in prison and a fine of $10,000.