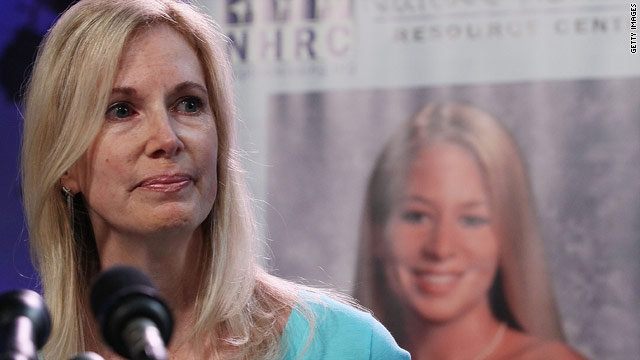 Get the latest on the Joran van der Sloot case and the slaying of Stephany Flores. Watch "Nancy Grace" at 8 p.m. ET Thursday on HLN.

(CNN) -- The mother of missing Alabama teen Natalee Holloway talked to the family of a murdered Peruvian woman whose case may be linked to her daughter's, the Peruvian family told CNN's sister network In Session.

Flores' sister Stephany was killed May 30. Joran van der Sloot, who is being held in connection with the killing, was twice arrested but never charged in the disappearance of Natalee Holloway in 2005.

Beth Holloway told Enrique Flores she hoped his family would not go through what her family had suffered, he said.

They told CNN's "Larry King Live" on Wednesday they hoped the eventual trial of van der Sloot can ease their pain and that of the Holloway family.

"I think the pain they are feeling, it's very hard," Enrique Flores said from Lima, Peru, where 21-year-old Stephany was killed. "We saw the body of our sister. They don't have the body of their daughter."

Van der Sloot, a 22-year-old Dutch citizen, was arrested twice in Aruba in connection with Holloway's disappearance but released for lack of evidence.

Holloway's body has never been found.

"I am not worried. I trust the justice in Peru. So, we are just waiting for the judgment," said Stephany's sister-in-law Carolina Jorge. "We are praying that this case (will bring closure) ... for us and ... for Natalee's family, too."

Dave Holloway met with Aruban authorities on the Caribbean island Tuesday and told CNN he believes progress is being made in the investigation. He declined to elaborate further.

Aruba also will have to wait to see what information may be contained in a laptop computer Peruvian authorities confiscated when they arrested van der Sloot, Aruban prosecutor Peter Blanken said.

The FBI will obtain that information from Peru and then share it with Aruban investigators, Blanken said.

Authorities in Aruba say they do not know whether the computer contains any information that may help in the Holloway case.

Van der Sloot has told authorities he attacked Flores on May 30 after she read an e-mail on his computer connected with the Holloway case.

He said he was in Peru for a poker tournament and met Flores while gambling. Police have said they think van der Sloot killed Flores to steal money she won.

No trial start date has been set in the case, but a hearing is scheduled for next week, when van der Sloot will give his first statements before a judge.

"(Van der Sloot) keeps telling so many lies and each time he is changing his version," Flores said. "He just killed her. ... He took money from her. He took ... her car. ... I mean, he sounds like a serial killer."